Mach Rider NES Game Cartridge
Mach Rider was released for the NES in 1986 in North America. In 1972, Mach Rider was released originally as a hot rod or race car toy that was also made by Nintendo. A ramp that came with the toy was used for making the car jump and a stick shift looking object with a few different meters also came with it. The car was placed inside, being able to charge up and shoot out at a high speed. The game has been referenced or made some type of appearance in multiple games. A vehicle in Mario Kart Wii is called Mach Bike, which has resemblance to the Mach Rider bike. A similar bike in Mario Kart 8 appeared, called Sport Bike. The remix medley form Smash Bros Melee came back to Smash 4 for the Wii U, being played on the stage Wrecking Crew.
The control of the game is more complicated than the other games for its era and it required great skills. The right and left on the D-Pad steered the Mach Rider and A accelerated it. B will fire the machine gun on Mach Rider that is used to blow up obstacles on the road and destroy enemies. Down and up are used for shifting gears, with the Mach Rider having four speeds and can travel at immense speeds in the third gear and the fourth gear. Points are scored in each round by destroying the enemies and specific obstacles using the gun. The amount of points gained depends on the strength of the enemy and what kind of obstacle is destroyed. The player can block an enemy attack by ramming the enemy into a hazard located on the race track, giving the player more points and bullets for the Mach Rider.
The Fighting Course will have the main story. The player takes control of Mach Rider and will travel through ten sectors while trying to prevent themselves from being killed by Quadrunners and obstacles like oil drums. If the player gets destroyed, they will explode into fragments then reforming if they have any energy left. Like the games Balloon Fight and Ice Climber, there is not a sequence at the end. Instead, the story starts over after beating the tenth level, giving the player a second journey of ten more newer sectors. When sector twenty is finished, the story will start again, using the first scenarios. Every sector in Fighting mode gives the player a choice of riding through Track A or B. Both of the tracks differ and each sector gives the player two new tracks to choose from.
There are three other game modes included. The Endurance Course has the player race a specific amount of kilometers before the timer runs out. Obstacles and enemies will try to slow the player down. Energy and lives don’t matter in Endurance but will cost time if the player is destroyed a lot. The Solo Course is exactly like Endurance, but has no enemies. The last mode is Design Mode. The player will get to design a sector of their own and then be able to race on the track using one of the regular gameplay modes. Similar to Excitebike, the game needed the Famicom Data Recorder so the tracks could be saved, but the device never was released outside of Japan. The virtual console versions on the Wii and Wii U were able to save tracks on the memory of the console, but the 3DS version had the design feature completely removed.
UPC: 0-50428-08545-5
Platform: NES
Players: 1
Condition: Used
Genre: Racing
Region: NTSC (North America)
Rating: Everyone 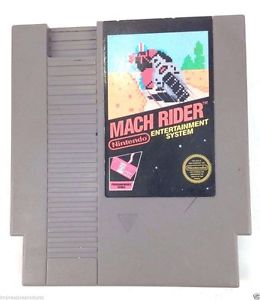