Predator NES Game Cartridge
Predator was released for the NES in 1987. It was published by Activision and Pack-In Video were the developers. The difference in the NES game from the movie is that Dutch goes to the jungle alone, with his team already dead. He also starts without weapons and the Predator will follow Dutch and confront him multiple times while playing. The appearance of large scorpions is another difference. Both the MSX and NES versions differed from the other versions of the game since those two were side scrolling platformers. The game has easy, normal, and hard difficulties, and will feature 30 levels in the Jungle landscapes on Earth, being split into two modes, the Jungle Mode and the Big Mode.
As Dutch arrives at the jungle, the only thing he has are the clothes he is wearing. In front of Dutch are ledges covered with trees which are mainly blocked with rock piles or some cut with bottomless chasms. To find weapons, Dutch will jump between ledges. This will also lead to the cave leading into the next level. The only thing he has for attacking are his hands. The weapons he can find are a machine gun, grenades, and a laser rifle. The first thing to do is finding a weapon as quickly as possible. The player will need to destroy and dodge guerillas as they are trying to kill you. Scorpions will also attack and will take a life point away if touched by one. Other enemies are also present along with moving boulders. The player can shoot and duck simultaneously but you can’t punch and duck simultaneously.
The player will have ten hit points. A life point is lost from getting shot from guerillas or touched by scorpions. The life meter are white boxes located at the top part on the screen, along with the lives the player has left and what weapon is equipped. When all ten hit points are lost, the player will die. Death can also occur when falling into a chasm. The game is over when all lives are gone. During Jungle Mode, the player will need to survive the jungle dangers while shooting wildlife and guerillas using one of the three weapons mentioned above. Each weapon will also have unlimited ammo. A stage is finished when the player enters a cave that will have them proceed onto the next stage. More than one cave will be present in some levels that will warp the player to a different stage, depending on the cave entered.
After a few stages, the player will go into Big Mode, where they will need to shoot purple and blue spheres so they don’t hurt them. Some of the spheres will have a power up that increases the firepower. After getting so far, the player will fight the Predator and will need to defeat him before continuing on the next level. The Big Mode will be the same through the game, with the only difference being the attack pattern of the Predator.
UPC: 0-47875-70002-4
Platform: NES
Players: 1
Condition: Used
Genre: Action and Adventure
Region: NTSC (North America)
Rating: Everyone 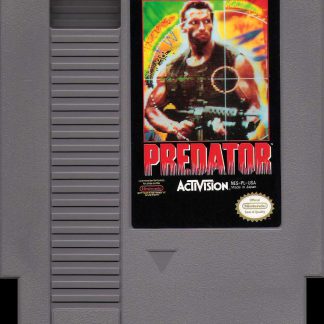