Mega Man 5 NES Game Cartridge
Mega Man 5 was released for the NES in 1992. It was developed and produced by Capcom. The graphics and platforming gameplay is kept from the previous four games. It was also met with positive receptions from critics for its music and graphics. Keiji Inafune had to re illustrate the game’s bosses many times but had fun doing it. The game takes place two months following Mega Man 4’s events during a futuristic 21st century.&nbsp;
Mega Man’s once ally and secret brother, Proto Man, leads a robot army on destructive attacks all over the world. Trying to weaken the defenders of the world, Proto Man decides to capture his creator Dr Light. Wondering why Proto Man is trying to take over the world, Mega Man has no choice but to go on a quest to stop him, being assisted by the robot bird Beat who Dr Cossack gave to him as a gift. Mega Man eventually prevails over the new group of Robot Masters that are working for Proto Man. These eight new bosses are Wave Man, Napalm Man, Charge Man, Crystal Man, Stone Man, Gyro Man, Gravity Man, and Star Man. Mega Man starts proceeding towards the fortress of Proto Man, confronting his brother and nearly gets destroyed during the process.
Another Proto Man shows up right on time and reveals that the Proto Man that Mega Man was fighting was actually Dark Man, a new robot that Dr wily has created. Mega Man then destroys the imposter and then goes after Wily who is inside his new hideout. He defeats him, saving Dr Light in the process. The fortress then began to collapse, and Wily managed to retreat again while Mega Man was holding the ceiling that fell from crushing Dr Light and himself. Just as Wily is escaping, Mega Man hears the familiar whistle, and then a piece of the falling ceiling gets blasted away, which allowed Dr Light and himself to escape. While both watch Wily’s castle collapse in the distance, their savior was turned out to be Proto Man, who then quietly slipped off unnoticed.
The gameplay once again has the player taking control of Mega man who can shoot, jump, and run and will need to traverse a set of stages. The player’s life meter will drain once damage is taken, but life can be restored by finding energy capsules that are scattered through every level. Energy capsules can also be picked up from defeated enemies. The main default arm cannon will be able to fire an unlimited amount of shots. The charge feature that was introduced in the fourth game was upgraded to allow a powerful shot to take up a slightly larger area. Every stage will end with the player fighting one of the Robot Masters, which when defeated will give the player their special weapon that they can toggle for the rest of the remaining gameplay.
The boss special weapons will require the use of weapon energy that can be restored in the stage that it is used. The other items the player can get are Energy Tanks, extra lives, and the Mystery Tank that will refill all items and health once picked up. when finishing specific stages, a player has the ability to call Rush, Mega Man’s robot dog, using him to cross big gaps or reach high platforms using his Jet and Coil transformations. These abilities will require to be refilled with the energy that is used for special weapons. Some level designs will be different than the past games from Mega Man V. An example is during the stage with Gravity Man, gravitation will be reversed from floor to ceiling, while the stage with Wave Man will have the player drive some water craft at the stage’s halfway point the rest of the way to the boss.
There will be a hidden circuit board in every one of the eight stages that the player can collect. When all eight are gathered, it will spell out MEGAMAN V and give a player access to Beat, the friend who is a robot bird. Beat can be called upon to attack the enemies on the gameplay screen.
UPC: 0-13388-11035-3
Platform: NES
Players: 1
Condition: Used
Genre: Platformer
Region: NSC (North America)
Rating: Everyone 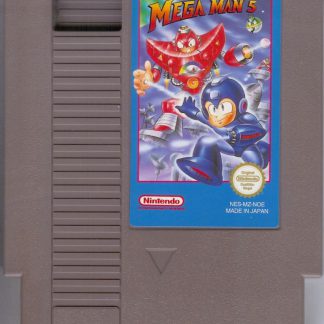