Mega Man 3 NES Game Cartridge
Mega Man 3 was released for the NES in 1990. It was developed and published by Capcom. The events in the game take place after Mega Man 2. The game follows the format that was set from the first two games, with the player as Mega Man trying to complete stages in a series of any order they want. Unlike the first two games, designer and artist Keiji Inafune considered creating Mega Man 3 was very stressful because of the limited time and his responsibility increase during development. The third installment sold more than one million units and received positive reviews from critics. The gameplay and presentation was praised especially, and like the other titles, has been released again on several other platforms and as a part of a variety of Mega Man compilations.
The game takes place sometime in the unspecified year of 200X. Dr Wily, a mad scientist who twice had plans for taking over the world, has claimed that he has reformed and began to work alongside Dr Light to create the peace keeping robot called Gamma. The Robot Masters that had charge o mining worlds went berserk, however, and took off with the the power crystals that were a part of Gamma. There were a total of eight crystals. Mega Man once again is needed to go into action and this time has Rush, his canine companion, to help collect the eight crystals from all the Robot Masters. Throughout the missions, the player will continuously encounters Break Man and spars with him. This masked foe has abilities that compare to Mega Man.
After Mega Man defeats all eight of the bosses, he revisits the four mining sites to fight against the Doc Robots. These robots have abilities from the Robot Masters that Mega Man defeated previously. When he retrieves the crystals, Dr Wily goes back to being evil, steals Gamma, then retreats to the fortress he just built. Mega Man goes to the fortress to stop Dr Wily’s new plan on conquering the world. He defeats Gamma and then Wily right after in the final showdown. As Dr Wily’s fortress starts to fall apart, Break Man shows up to rescue Mega Man but too late to rescue Wily, who was crushed under rubble. Mega Man regains consciousness inside the lab of Dr Light and is then told that Proto Man must have saved him. His notes revealed Proto Man was the older brother of Mega Man.
The gameplay will stay the same as the previous two games. The player will take control of Mega Man and traverse eight stages that can be selected in any order. The player’s main blaster will be used to destroy the various enemies in the game. There are power ups the player can pick up in every stage that includes extra lives, special weapon ammo, life energy, and the E Tanks. E Tanks will be stored and then can be selected to refill a player’s life completely. At every stage’s end, the player will need to defeat one of the Robot Masters. The eight in this game are Needle Man, Gemini Man, Snake Man, Spark Man, Shadow Man, Top Man, Hard Man, and Magnet Man. Each of the Masters will feature a special weapon that has power related to the current stage. Once one is defeated, the special weapon will be added to the player’s arsenal. Robot Masters will be weak to other Robot Master’s special weapons, which will allow a player to clear boss battles easier.
This is the first game in the Mega Man series that features a slide maneuver. This will let a player slip underneath an enemy attack and barriers that are low level. When certain stages are completed, the player will be able to use new abilities for Rush, his robot dog. The transformations for Rush include Rush Marine, which is used to travel underwater, Rush Jet, which is used to fly across the screen, and Rush Coil, which is used to jump higher. Through the levels, the player will encounter Proto Man but as Break Man, who is the mini boss that when defeated, it will open a passageway for a player to progress in a stage. This game also expands on the past two games by adding more stages between the regular eight bosses and Dr Wily’s fortress. Passwords are used to continue a game.
UPC: 0-13388-11025-4
Platform: NES
Players: 1
Condition: Used
Genre: Platformer
Region: NTSC (North America)
Rating: Everyone 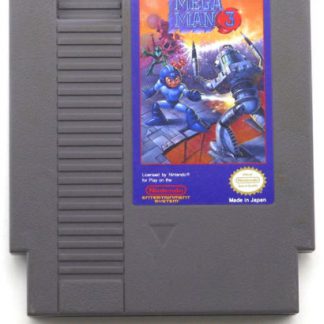