Mega Man 6 NES Game Cartridge
Mega Man 6 was released for the NES in 1994. It was developed by Capcom and published by Nintendo. It was the sixth game released in the series of Mega Man. This sixth installment was the first Mega Man game to receive input on character designs from the fans that were outside of Japan. It also was the last Mega Man game to be released for the 8-bit NES console. Because of the NES support declining and the SNES support growing, Capcom had decided to not release the game in America, therefore, Nintendo in America decided to release it themselves. The reviews from critics favored in the game the model in established gameplay and comparable presentation from the previous six installments. Though Mega Man 1 through 5 are on the Virtual Console for the Wii, the sixth is absent. It was eventually released on the Virtual Console for the Nintendo 3DS.
The story of Mega Man VI is set after Mega Man 5’s events. A Global Robot Alliance was created to counter repeated attacks from Dr Wily. A year passes, and the first Robot Tournament was held so they could find out which peace keeping robot is the strongest. The tournament was being hosted by Mr X, an unknown man that was the X Foundation leader. Many strong robots participated in the tournament. Dr Light, who was a pacifist, had decided to not enter Mega Man in the competition, instead having him supervise the tournament. Before the tournament could start, Mr X announced that he reprogrammed the competitions eight strongest contestants so they could help him take over the planet. He then says to Mega Man that he has been manipulating Wily from the start.
The eight robots that were reprogrammed all were representing different countries. Flame Man was representing Saudi Arabia, Wind Man was representing China, Centaur Man was representing Greece, Knight Man was representing England, Yamato Man was representing Japan, Tomahawk Man was representing the United States, Plant Man was representing Brazil, and Blizzard Man was representing Canada. Mega Man and his dog Rush went out to stop the plan of Mr X. He then destroys the Robot Masters, making his way toward the fortress of Mr X. He is defeated quickly and reveals himself to be Dr Wily in disguise. Wily flees to another fortress, with Mega Man pursuing him and defeating him again. Dr Wily finally gets sent to prison at the game’s end.
The gameplay will be similar to the past five games in the series. The player like usual will take control of Mega Man and finish a set of stages that will be side scrolling and will be littered with robot enemies and sometimes a bigger mini boss. The player’s main method to attack is Mega Man’s Mega Buster on his arm, which can also be charged to fire more powerful and wider shots. At each stage’s end, there will be a battle against a robot boss, with the player gaining that boss’s special weapon once they defeat them. The eight stages will be able to be finished in the order of the player’s liking. All the bosses, however, will be weak to another boss’s special weapon, which will give strategy on what order to play the stages.
The player’s health will be represented with a gauge on the screen. Their health can be restored when energy pellets are picked up. Other items that can be found throughout the stages are pellets that will restore special weapon energy, energy tanks that can be reserved, and extra lives. This game also introduced an Energy Balancer that will restore the special weapon that has lower energy than the rest when picking up pellets for refilling them.
The past Mega Man installments would allow a player to use their dog Rush to transform into a support item to help the player traverse inaccessible or difficult areas within a stage. Mega Man VI features a couple of adapters called Rush Adapters. These will have Rush fuse onto Mega Man and produce a special form. The first is Jet Mega Man which will let a player hover or fly upward for a short amount of time. The downfall is it will not let the player use charged shots. The second form is Power Mega Man, which will utilize a short range but powerful punch attack that will destroy large blocks. Players will not be able to slide in either form. The game will also present a less linear way to finish stages than the past games. There will be two pathways to multiple stages that will lead to the boss room. The player, however, will often need a Rush Adapter to start an alternate path. Even though both pathways will clear a stage, just one of the paths will give a player one of the letter circuit boards that are used to assemble the robot bird Beat. When all four of the parts are collected, it will allow a player to summon Beat, which he will then attack enemies.
UPC: 0-45496-63076-8
Platform: NES
Players: 1
Condition: Used
Genre: Platformer
Region: NTSC (North America)
Rating: Everyone 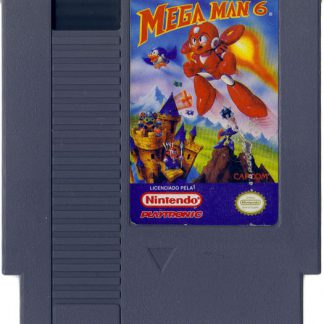