Tecmo Super Bowl NES Game Cartridge
Tecmo Super Bowl was released for the NES in 1991. It was developed and produced by Tecmo. It became the first video game based on sports to have the license privileges for both the NFL and NFLPA, therefore allowing for the attributes and names of real players from the NFL and the NFL teams. Previous games had one or the other licensed, but never both. All the player attributes and team rosters were based from the 90′-91′ season, meaning no 1991 rookies that were drafted, new signers, or the traded players previous to the 1991 NFL season made the cut for the game, though the game was released at the end of 1991. The game uses the NFL schedule from the 1991 season only, therefore playing more than one season with different schedules was impossible.
The game’s main menu gave the player options for the NFL Preseason, the Season Game, and the Pro Bowl. The team data was able to be accessed on the game’s main menu. Unlike the first game that had nine players on both offense and defense, Super Bowl had eleven players on defense and every roster has 30 players. The eleven players on the field were not able to be substituted, but they could also not be injured. Every team had a total of seventeen players on offense, with eleven of them being starters and six of them being substitutes. During any part of gameplay, there will be eleven players for both teams on the football field, which is consistent with the rules of NFL. There were also punters and kickers on team rosters.
On top of the real players and teams, the game incorporated the actual NFL regular season from 1991. The NFL playoff format, including a Super Bowl and Pro Bowl, would also be used.
The game retained the original arcade game style of football that included the ability for the player to break some tackles and no penalties. There were new features added like player injuries, health conditions for players that varied, the player able to substitute players, editable and expandable playbooks, a single season page of NFL Records, stat tracking, timeouts for the player to avoid a ten second runoff, quarters that are five minutes, fumbles, and a coin toss. The game will still use cut scenes during important moments in the game like halftime shows and touchdowns. TSB added cut scenes whenever a football player was injured or when a big play occurred.
As part of gameplay, the player can adjust their plays on offense and substitute players on every NFL team, including the teams in the Pro Bowl. The rosters for the Pro Bowl can also be edited. Special Teams, Defensive, and Offensive players can be viewed on individual player cards that have their attributes, statistics, and status, which are able to decrease or improve, making a player worse or better. During the preseason or Pro Bowl, the players that are injured will return immediately when the game ends, the statistics will not be kept, and computer AI will not be as difficult as regular season games.
The game will have multiple modes. In the regular season mode, the player will control a team and go through the whole NFL season. Multiple teams are able to be controlled. The player can also choose three different styles of gameplay in the preseason, season, or the Pro Bowl. Choosing the MAN option will mean a player calls the plays and then runs the plays. The COA, or coach, option will have the player call plays, but computer players will run them. Choosing the COM option will have the computer control all aspects of gameplay, with the player watching the game. In every instance in all the modes, unless a player edits Team Data before setting starters and plays, the play selection and depth chart will be set on the game’s default.
UPC: 0-18946-11012-7
Platform: NES
Players: 1-2
Condition: Used
Genre: Sports
Region: NTSC (North America)
Rating: Everyone 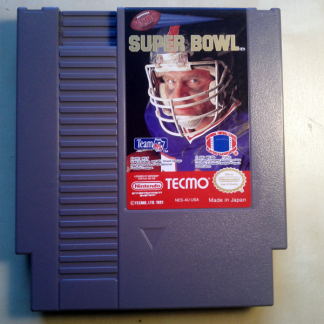