Kings of the Beach NES

Kings of the Beach NES Game Cartridge
Kings of the Beach was released for the NES in 1990 and was developed by Electronic Arts. Randy Stoklos and Sinjin Smith are the two players you can play as. The game has three modes, which are match play, practice, and tournament. In tournament mode, the player will go through five different beaches that include Australia, Rio de Janeiro, Waikiki, Chicago, and San Diego. Tim Hovland, Mike Dodd, and Ron Von Hagen are three other volleyball players that are featured. EA threw in some other characters from a couple other games, like Hard Hat Mack and Lester who are from Ski and die and Skate and Die. The game has a total of 15 levels with a total of 20 challengers to defeat to be crowned the King of the Beach.
The controls include using the D-pad and two buttons to do everything, being very simple. The advanced moves are being able to dink or a one hand Kong block. The game also gives the player the ability of arguing with referee calls. Doing this will sometimes have a point overturned for the player. If the player argues too much during the match, the referee could penalize you, giving a red card and taking a point away.
UPC: 0-83717-12007-0
Platform: NES
Players: 1-2
Condition: Used
Genre: Sports
Region: NTSC (North America)
Rating: Everyone 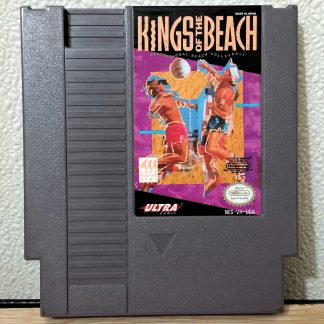