Rambo NES Game Cartridge
Rambo was released for the NES in 1988. Pack-In-Video developed the game and Acclaim published it. The game was based on the second movie Rambo: First Blood Part II. It starts Rambo being asked by Colonel Trautman if he wanted to leave prison and begin the mission. The player will have the choice of picking yes or no, but cannot progress in the game unless choosing yes. The player will then go through camp and try talking to other people. When Trautman is talked to again, he will tell Rambo about the mission. Rambo is then dropped in the forest, then he begins fighting spiders and some other types of forest creatures. The bosses in the game will include helicopters and giant spiders. The gameplay is similar to Zelda II: Link’s Adventure, with the player killing enemies to get experience and having similar layouts.
In the later part of the game, the player will find and pick up weapons to fight the enemy soldiers. This will happen near the end part of the game. The sequence at the end has Rambo picking up a large kanji character and throwing it at Murdock when returning to base. This turns Murdock into a frog. The Japanese version has staff credits upon completion, but the North American version just says End.
UPC: 0-21481-10301-1
Platform: NES
Players: 1
Condition: Used
Genre: Platformer
Region: NTSC (North America)
Rating: Everyone 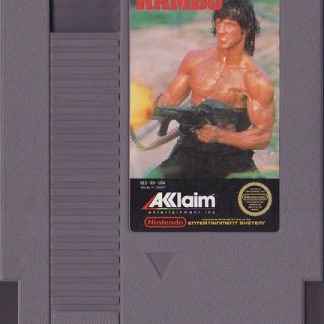