Vindicators NES Game Cartridge
Vindicators was released for the NES in 1988. It was developed by Atari Games and published by Tengen. It was originally an arcade game released the same year. The game had no license from Nintendo and had to use another chip to get by the 10NES lockout that the NES had. The sequel for the version in the arcade was also released in 1988. It was a Gauntlet conversion kit called Vindicators Part II. There were only about 400 units made. The gameplay to the sequel was almost exactly the same as the first game, only having a few small differences.
The game starts by the player choosing a difficulty level. The harder difficulty levels will make the enemies more difficult and the player weaker, but will start a player in later levels, specifically the galaxies level set along with powerups. The game’s easiest difficulty will start a player in level one without bonuses. A player will take control of a tank that has fuel that is draining constantly and will travel through a series of level from the bottom to the top. Along the way, enemies and obstacles will be encountered and power ups will be available. These power ups will include two sub weapons that are bombs, which are powerful rockets, smart shots, which are homing missiles, and also have stars, being the currency of the game, shields, and tank fuel.
Every level will have a key for opening the door at the level’s top. That door will take a player either to the level that is next or take them to a hub that will have many power ups, but the hub will need to be exited within 10 seconds. In the NES version, the player gets 15 seconds but the timer will stay stuck at 10 seconds for the first five seconds before it starts to count down. If a player does not escape in time, their tanks fuel will be cut in half. When the hub is escaped, a player will progress to the game’s next station.
Every now and then, the player will need to defeat a boss before advancing. Normal shots on bosses will not be effective, therefore a player will need to plan ahead and but sub weapons at the correct time to increase their chances of defeating the boss. When a boss is defeated, the player will progress to the level’s end.
When a level is completed, a player will be taken to the shop that will have upgrades and items. Upgrades will include tank power, speed, etc, and will be able to be bought with stars. Whenever damage is done to the player’s tank, its shield level will decrease. Buying a shield will reduce damage down dramatically to just a pixel’s worth from the fuel gauge every hit. Whenever the player’s fuel is completely gone, their tank’s speed will reduce to crawling and a timer will start from 10 seconds. If the player does not find any fuel within the 10 seconds, or if they are killed while the timer is going, the player’s tank will explode and a life will be lost.
UPC: 0-31763-06112-0
Platform: NES
Players: 1-2
Condition: Used
Genre: Run and Gun
Region: NTSC (North America)
Rating: Everyone 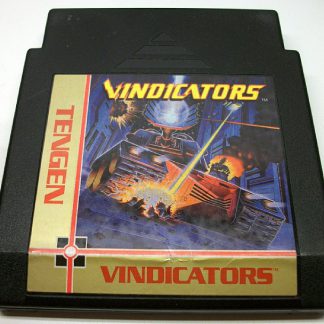