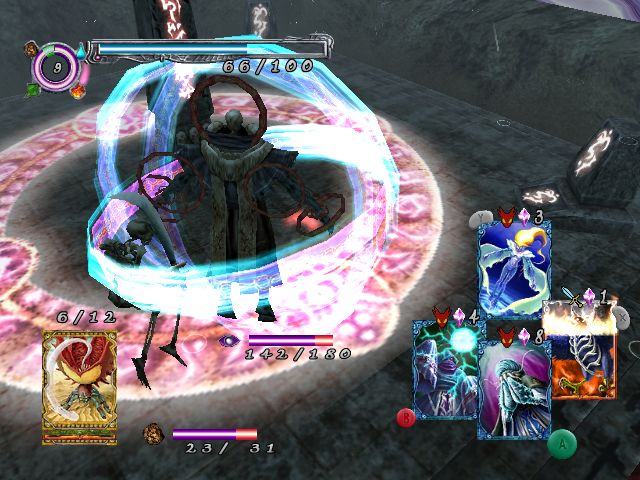 These days From Software are mostly known for the Dark Souls series of games as well as an endless parade of Armored Core sequels and expansions. However before they hit the mainstream they were a diverse developer and one of their most unique efforts was Lost Kingdoms, a game centered around card battling conveniently around the time Yugioh hit America. Games that feature card based battles have typically been the province of handheld platforms, especially on mobile phones. So in this regard Lost Kingdoms was able to stand out even more aside from being the only RPG for the system at the time. Though flawed in some respects it would pave the way for similar titles such as Baiten Kaitos and Culdcept.

As the GameCube’s first RPG it is easy to have flashbacks of other first generation RPGs that were absolute crap like Beyond the Beyond, Orphen, or Virtual Hydlide. It goes without saying that RPGs released early in nearly every console cycle are usually terrible as the desire to take advantage of new technology takes precedence over tight mechanics. Luckily Lost Kingdoms bucks that trend somewhat and while it isn’t an epic along the lines of Final Fantasy it is a solid game with an interesting hook that is still compelling even today, especially since it is shorter than average for the genre.

A mysterious substance known as the black fog has begun sweeping the world, consuming everything it touches be it people, castles or even entire towns. No one knows where it came from but when it invaded the land of Argwyll King Jade ventured out to discover the source only to never return. It is now up to his daughter Princess Katia to follow in his footsteps and continue his quest.

It’s a generic premise and unfortunately the story takes a back seat to collecting cards and only serves as window dressing to send you to the next area. The cast of characters can be counted on one hand and there is no character development to speak of. In fact there are no towns and only a few random NPCs to converse with. That leaves the gameplay to do the heavy lifting and at that it succeeds although I say that with a few caveats.

In the world of Lost Kingdoms cards are everything. Princess Katia does not equip weapons or armor or use items; in fact none of those exist in the game. Cards are your only means of offense and as you progress you’ll add more to your deck. In total there are about 100 cards to collect with demons of every elemental alignment filling the ranks. The cards have a variety of effects, with some summoning independent creatures that fight by your side until destroyed or appearing for a single attack. The cards used during battle gain experience that can be used to either make copies or evolve them into stronger creations; the Princess’s stats increase at set points in the game.

It goes without saying that deck building is the most crucial element of the game. You can build a deck of thirty cards to bring into every dungeon and it is imperative to know the quirks of each individual card such as their attack, range, and alignment before tossing them in your hand. A random selection of four cards are selected from your hand with new ones shuffled in as they are spent. Having a balanced assortment is important due to a few factors: Katia cannot attack on her own so if you have used up all cards in your deck there is no choice but to return to the world map and start over again. Nearly every dungeon has a deck point where you can add cards to your active deck as well as fairies that can randomly refresh one card but it’s almost guaranteed that your first time in every dungeon you’ll need to start over. Regardless of the fact that all chests opened stay that way it sucks to have to replay the same dungeon twice no matter how much faster it is the second time around.

It also inhibits the game in other ways. Because your deck size is so limited the dungeons are incredibly short with only a few rudimentary puzzles to break the monotony. The encounter rate is actually managed fairly well however due to the random deck shuffling it is possible to blow through a number of cards in one battle. Trust me reaching a boss only to realize you have 3 cards left is not a good feeling. Despite these misgivings the game is actually incredibly short with most probably seeing the end credits after 8 hours. There is a multiplayer mode that is actually surprising fun but it still isn’t enough to make up for the lacking core game.

Lost Kingdoms has a clean visual presentation and is darker in tone than most GameCube titles. Most of the design work clearly went into the creature models as the game’s artwork and monster design are generally excellent. However the models are blocky and the frame rate takes a massive hit when 4 enemies are on screen. The environments are drab unfortunately and uninteresting; you can only see the same graveyards, castles and dirt textures so many times before getting sick of it. There isn’t too much music in the game and it limps along in the background, leaving the sound effects to carry the load. More could have been done sonically.

There are aspects of Lost Kingdoms that I like but overall I found it only above average. Its features however would form a solid base for its much improved sequel.