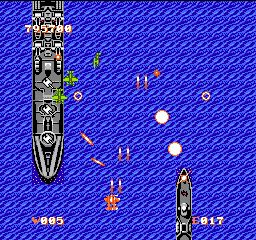 What a difference a year makes! At least not literally. While I could appreciate 1942 for its unique setting (for the time) in a shooter the reality is the game was a bit too spartan too be enjoyable and was definitely a product of its time. 1943: the Battle for Midway was released around 2 years later in the arcade and saw a number of improvements but followed along the same lines as its predecessor. While it was ported to many different formats the NES version is the most interesting.

Still set in the Pacific Theater of World War II this time the game follows the battle in Midway Atoll, an important refueling station during the war. The object of the game is to ultimately destroy the Japanese Battleship Yamato and any other ships in your path along the way.

Player death is handled differently this time around. Technically you have an energy counter that is constantly ticking down as you progress, much like Gauntlet. So long as you have some amount of time left collisions with bullets and enemies will only knock off a percentage of time rather than outright kill you. The power-ups dropped by designated ships can be cycled through for various weapons and items but health refills tend to be the most important. Technically you only have one life; if you’ll have to continue or use a password to pick up where you left off.

The NES version is a faithful adaptation of 1943 and features a number of improvements that create a deeper gameplay experience. This version allows you to customize your ship in five categories: Offensive power, Defensive power, Energy Level, Special Weapons, and Special Weapon Time limit. At the onset you only have 3 points to allocate but if you scour every inch of the levels you can find a hidden item that will give you point to spend.

Customizing the ship opens the game up to numerous different play styles, all of them viable depending on your preference. If you’re the type of gamer who can’t dodge bullets worth shit you can increase your defense and maximum energy for better survival. On its own the default cannon is fairly useful as it has rapid fire but putting points in offense will make it a literal ship destroying beast.

Special weapons are handled differently as well. Initially you’ll only have access to a spread shot but with more points you can unlock extra weapons. Special weapons aren’t permanent and will disappear once the weapon meter reaches zero, necessitating extra points for more time. Or if you prefer, collecting the same weapon again will not only boost its power but add thirty extra seconds. The most important take away is that these options are all viable. Every point you spend has a noticeable and immediate impact, giving you extra incentive to blast every inch of the screen to find the hidden “shops”.

Unlike the arcade game this version has been bumped up to 24 levels rather than 16. Most levels are split into two distinct parts: one above the clouds and the eventual decent to the sea to destroy numerous battle ships and an eventual boss. The levels are more compact than in 1942 but just as hectic. This is still one of the more frantic shooters on the NES, one that can easily kill you if you are preoccupied with collecting items than survival.

The initial levels ease you into the game as most enemies don’t actively fire and merely swoop in and fly away. It’s around the 6 or 7 level mark that the game bares its teeth. If you haven’t kept up with modifying the ship chances are you won’t make it to the end of the game as it becomes so chaotic that ugly slowdown rears its head. At least there are passwords to save progress, I doubt anyone sane human being enjoyed slugging through all 32 levels of 1942 in one sitting.

Despite all of its new features 1943 does become repetitive. You are essentially fighting the same 5 enemies the majority of the time until you reach the latter portion of the game. The boss fights, one of the game’s highlights, also suffer from this same repetition. There are only 5 unique bosses in the game yet each encounter somehow feels unique. Chalk it up to good game design.

Capcom handled the port this time around rather than Micronics and the results are immediately evident. The terrain is more varied this time around and despite flying over the sea for the majority of the game they’ve manage to change up the color and variety of the waves for some visual distinction. Most importantly the single looping music track of 1942 has been replaced by a few ditties that, while they aren’t great, are unobtrusive at the very least.

This is the game 1942 should have been and in my opinion is superior to the arcade game outside of the graphics. A few years makes all the difference as 1943 is one of the top shooters on the NES despite its age.