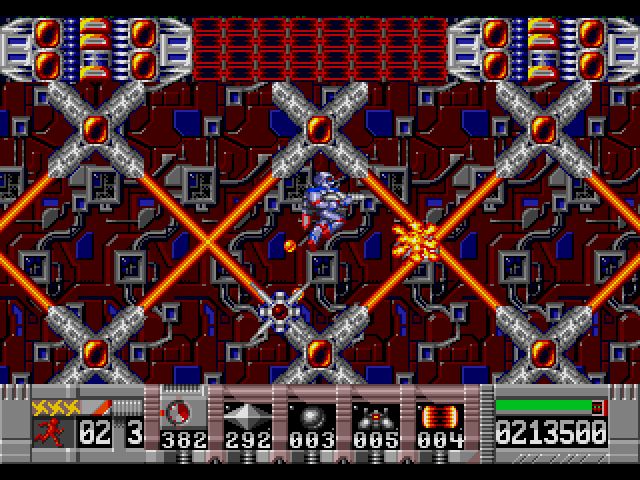 Turrican is a series that garnered a massive following in the UK on the various computer formats it debuted on. As Britain’s sort of answer to Contra it isn’t really fair to compare the two series since they are different games gameplay wise. Honestly I’ve always wondered what was the big deal? This became even more pronounced once I got my hands on the Genesis port. There are some good ideas buried in the game that are let down by terrible execution. Turrican is far too frustrating for me to ever recommend to anyone.

Turrican plays more like a fusion between the action of Contra and the open ended level design of Metroid. The game’s five worlds are broken down into two or three levels each and comprise one long journey from the opening futuristic city to a trip underground as you tackle the Machine’s tower from the bottom up. Each level is a sprawling world unto itself, full of hidden secrets and often times more than one path to the exit. There are invisible weapon blocks littered around the environment that practically rain items which you’ll need survive the brutal trek to the Machine’s tower.

There aren’t too many weapons in the game and unfortunately most of them lack the necessary punch to feel effective. The default machine gun can be upgraded to a spread shot or laser. The spread shot covers a wide range but is incredibly weak; the laser can only fire straight ahead. You have access to a Metroid style spiked morph ball that can mow through enemies but can be uncontrollable and lead to a cheap death. It’s also limited in use. The most powerful weapon at your disposal is the lightning whip, a beam that can be swung in a circle with the caveat that you can’t move. Incredibly useful for finding hidden items and with the right positioning you can decimate bosses without taking a single hit. There are also a few special weapons that are more troublesome to use than they should be.

Using the game’s sub weapons is a pain in the ass due to the stupid control setup. Up is used to jump but is also mapped to a button on the controller. You use A to select a sub weapon and B to use it which is really unintuitive in the middle of combat. Had they relegated the C button to special items it would have much more natural.

This is one of the most difficult games for the Genesis let alone of the 16-bit era. There is rarely a moment where some enemy or foreign object is not attacking you. Christ even the environments themselves have it in for you with an endless array of retractable spikes, dripping blood, bottomless pits, and even raining meteors. The urge to explore has to be tempered by the ticking clock and since the exit is never in a straight line it can be very easy to run out of time. If you somehow reach the bosses at the end of each world good luck. Outside of one or two that have conveniently placed safe zones I can guarantee you’ll blow through your stock of lives in defeating each one and if you continue its back to the beginning of that stage. And that’s not even the worst aspect of the game.

The main frustration with Turrican and the one that completely ruins the game is how damage is handled. There is no moment of invulnerability when hit, meaning even the lowliest enemy can drain your life bar in seconds an event that will happen frequently. Words cannot express how aggravating it is to see your health deplete in seconds and not even realize how. The fact that it can happen at any moment makes this game infinitely harder than it should be and not fun at all.  Seriously if they had fixed this one flaw the game would at least be playable.

Turrican was a technical showcase for the Commodore 64 as it really pushed the aging technology further than anyone thought possible and received numerous ports to the different computer formats in the UK.  However what was once technically brilliant comes across as lackluster on the Genesis.  Backgrounds are mostly flat with only a single layer of rare parallax.  The animation of the main character is still pretty impressive as well as the large bosses but those are the only good points when it comes to the visuals.  The brilliant soundtrack from the Amiga version is almost completely gone with renditions that simply don’t match up.

On the Commodore 64 and Amiga Turrican stood out.  But as a Genesis game it simply can’t compete against the better designed action games available.  There is simply no reason to bother with this when games like Contra: Hard Corps or even its direct sequel Mega Turrican are available.