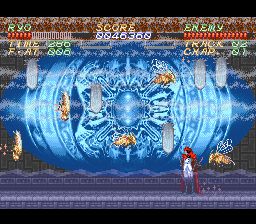 When Sega bought publisher Renovation they inadvertently screwed many SNES gamers out of some pretty cool imports. Arcus Odyssey was cancelled (but the full game still exists online), The Journey Home’s localization went kaput, and the subject of this review was also canned. Psycho Dream should have been released here as Dream Probe but sadly wasn’t meant to be. It doesn’t matter though as it can still be enjoyed regardless; the only text is in the intro and is inconsequential. Similar in style to Valis and El Viento (all developed by the same company) it is just as good if not better than those titles and worth tracking down for fans of action games.

While the game does not have cut scenes to drive along its plot the story is fairly in depth. Sayaka Kaori has fallen into a coma, with the only means of reaching her being a machine that can peer into dreams. The National Public Safety Commission are the only ones authorized to enter people’s minds and sends two of their best officers, Ryo and Maria, to hopefully save Sayaka’s life.

The fairly in depth plot provides a perfect backdrop for the proceedings that follow. Because the game takes place in Sayaka’s mind there’s a dream like haze to the action that is surreal. The game takes place in a mix between modern day locations that have been overrun by dream demons like something out of a Megaten game. Both Ryo and Maria take on alternate forms to better deal with the chaos in Sayaka’s mind and how you approach the action is slightly different depending on who you’ve chosen.

Both heroes have their own individual weapons and gameplay differences that make playing with each a unique experience. Ryo is a cyborg who starts out with a sword but gains a sickle that increases in size and the arc it covers as it levels up. The sickles annoyingly don’t cover the same length as the default sword however at its max level it becomes a whirlwind of lasers that rebound off nearly every surface. Maria starts out with a Belmont style whip but trades it for a mean pair of claws. They are powerful but also force you into close range which doesn’t make sense in my book; it should have been the other way around. In her ultimate form she gains butterfly wings that slow her descent after jumping.

Collecting blue crystals rather than yellow will send your weapon down a different evolutionary path. Blue crystals grant a laser gun that is exceedingly weak at first but becomes better as it levels. For Ryo it will eventually become a more focused three way laser; for Maria it gains homing capabilities but is weak. While I found it useful in spots having to wait until it is fully powered before it becomes useful means you’re better off sticking with upgrading your standard weapon.

This is a slower paced action game, one that is more focused on combat than platforming. Each level is comprised of multiple segments and fairly long with plenty of enemies to kill along the way. It bears a heavy resemblance to Valis, another Riot/Telenet game. Unlike those games however Psycho Dream comes up short in enemy variety and interesting creatures to kill. You’re mostly fighting slugs, snakes, and gelatinous creations that seem indifferent to your presence. There are occasional flashes of inspiration, such as stage 5’s high speed run up to the final stage but these moments are fleeting. You’re given a lot of powerful weapons but outside of the boss battles you’ll be hard pressed to find interesting enemies to use them against.

Overall Psycho Dream is a bit easy and worst of all short. You have infinite continues and although you are kicked back to the beginning of the current stage that is a minor impediment. The 300 second time limit I guess is supposed to instill a sense of urgency however it resets whenever you enter the next block of a level. With that in mind you can very easily sit and kill fodder enemies to refill your life bar in most spots with little fear. The only real challenge comes from the boss battles and that has more to do with the spotty hit detection than any complicated patterns of attack. These bastards are extremely cheap, inflict massive damage with every strike and are near impossible if you aren’t decently powered up. However it is never so bad that you won’t feel like giving up out of frustration. With only six levels it can be completed in a short afternoon which sucks as it is a solid game.

Graphically Psycho Dream is carried by its art design. The creatures you’ll encounter among the various landscapes don’t resemble any of the typical demons you find in most games. The enemy list mostly consists of what appear to be floating amoeba and various demon world insects. While it eschews gimmicky special effects the game leans heavily on transparency effects. It’s pretty cool if a bit overused. The standard enemies aren’t anything to write home about but the large bosses certainly make up for them. These mayors are huge, screen filling monstrosities that every bit as terrifying to look at as fight. The only area the game comes up lacking is in its music, which isn’t terribly exciting. Surprising as I’ve enjoyed Michiko Naruke’s work on the Wild Arms series tremendously.

With greater enemy variety and another stage or two this could have been excellent but instead is merely solid. Although it stayed in Japan the only text is in the intro making the game extremely import friendly. It’s probably dirt cheap too and worth tracking down.