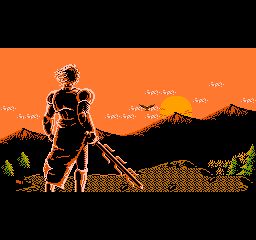 I was never a fan of the Legend of Kage, not in the arcade and especially not on the NES. The idea of running through the treetops and fighting ninjas and assassins like in the Kung Fu flicks I used to watch was enticing for all of five minutes before I grew bored of it. I could make the joke that in another five minutes I would have seen all the game had to offer but I’ll refrain. When I saw the initial advertisements for Demon Sword I didn’t realize it could pass for a sequel to LoK but I still played it anyway and was pleasantly surprised. Surface similarities aside Demon Sword won me over by having more content and better production values.

Not since the days of the Atari 2600 and a semi-nude Fabio on the cover of Ironsword has a box art been so misleading. The buff warrior wielding a bad ass flaming sword? Yeah, no. The game takes place in feudal Japan and your samurai is wearing a kimono with a slit up the side. Deceptive marketing aside there’s no getting around it, Demon Sword is the Legend of Kage with far more depth and much better graphics. It also has some of the same flaws that are pretty annoying but all in all DS is a solid action game.

Your basic offense consists of shuriken that are weak but stun enemies and an incredibly short dagger. There are many power-ups, some temporary like the five-way stars and ninja doubles and others permanent, such as extensions to your life bar and more powerful stars. Throughout each level are optional doors opened with keys that have items or miniboss encounters. Since there is no time limit you can easily sit in one spot to farm items so long as you can stay alive. The Demon Sword in the title is your weapon and will grow in length every two levels to actually become worth a damn.

Demon Sword contains the same high flying antics as Legend of Kage with spacious levels that unfortunately drag on too long. Because the background elements are recycled so heavily it is easy to feel as though you are running in circles with no other course but to keep going and hope to see some landmark that is different. It is also easy to leap into a bottomless pit or other stage hazard like spikes when using your leaping prowess.

The game is also a bit difficult as enemies spawn indefinitely, even when you are standing still. In the initial stages the dagger is your most powerful weapon but has terrible range. Until the midpoint of the game you are going to take far too many cheap shots from enemies until hopefully you’ve farmed some power-ups. Any of the boss battles feel like a nightmare since the throwing stars are so weak and your sword isn’t useful until near the end of the game. This is a game that requires some amount of patience to enjoy its good parts, something that I don’t think most will have. It’s a shame since the game is still fairly unique but at the same time even I struggled to stick with it.

What we received in the US is a drastically stripped down version of the game, forced to fit into a 2mb cartridge. Half of the game’s levels were cut as well as a number of the magic spells. These magic spells are pretty damn awesome; one creates a hurricane that sweeps away enemies while another transforms you into an invincible dragon. On the other hand Demon Sword is more balanced since you actually have a damn life bar. Much like Legend of Kage you die in one hit in Fudou Myououden and death comes pretty frequently. Although enemies require a few more hits to kill in Demon Sword you can also permanently increase your attack power. You can make a case that 6 more levels is a bit much especially as each tends to drag on far too long but it’s not as if you have to complete the game in one sitting and in that regard I give a slight nod to the Japanese game.

Despite the similarities between the two games Demon Sword is a much more attracting package visually than Legend of Kage. Granted it came out years after that game but the leap in art design is pretty significant. The various forests, caves, and graveyards are incredibly detailed and fully realized and most of all give the game a sense of variety. Leaping from the treetops actually feels like Crouching Tiger, Hidden Dragon, except, you know, this game came first. Even the various optional and end level bosses are artfully designed. I will say that the protagonist’s choice of outfit is a bit suspect; a skirt with a slit up the side?

Demon Sword is a surprisingly solid game despite the significant cuts made to its content. Of course if you can play the Japanese original than go for it but you could do far worse than taking its US counterpart for a spin.