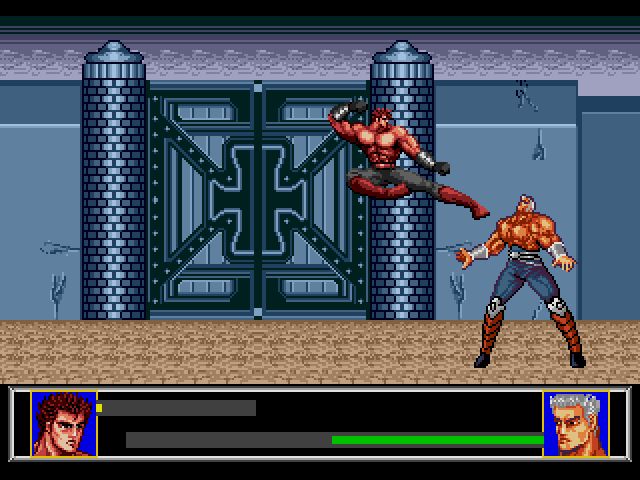 Everyone remembers Altered Beast, Golden Axe, and Ghouls N’ Ghosts at the Sega Genesis launch but there is one game that no one dares speak of. The Last Battle is a bad game no matter how you look at it and while most terrible launch games manage to skate by based on sheer wow factor TLB was not able to ride that wave. That should give you an idea of how bad the game is but what’s even worse is that it could have been good! The numerous terrible design decisions all conspire to make this one of the most frustrating titles you’ll ever have the misfortune of playing.

Like Black Belt before it the Last Battle is actually a Fist of the North Star title stripped of its license. By this point I had played the terrible NES game and read a few issues of Viz’s releases of the series so the similarities were not lost on me. Those familiar with the later story arcs of the manga will recognize many of the series regulars like Falco, a grown up Lin and Bat and Kaioh.

Aarzak is only armed with a punch, kick and jump kick as offense to survive in this post-apocalyptic world. Get used to these as they are all you have for the length of the entire game. With timing you can reflect any projectile which is an important skill you’ll need not too long after the game starts. As you defeat enemies a power gauge fills slowly and at set points Aarzak becomes powered up, with his shirt shredding and his punches and kicks becoming more rapid. I’ll warn you now that the gauge fills incredibly slowly so don’t expect to make much use of it. On certain levels on the world map you will encounter allies who will boost your attack or defensive power after engaging in some nonsensical dialogue.

The game’s four chapters are divided into many sub levels and you can explore the map freely with the only caveat being that you’ll have to manually walk through each level to a given stop. The stages range from the simple side scrolling action affairs to brief areas where NPCs will enhance one of your stats. The coliseums are generally where boss battles occur although sometimes you’ll need to visit a specific area first to unlock them. The worst are the god damn mazes.

The labyrinth levels expose all of the flaws in the game’s controls and design as you try to punch flying axes and knives, dodge bouts of flame and attempt some light platforming. It is very obvious the game wasn’t designed to handle these elements in mind; these levels are where most will die and give up. And that is just the beginning of the frustrations that lie in wait.

The Last Battle is one of the most difficult games you’ll ever play and it all stems from bad game design. You have a single life with no continues, passwords, or battery back-up to help you reach the end of the game. With the game split into 4 chapters with as many as nine sublevels each that is insane. Aside from that there are no power-ups and the only way to restore health is to defeat bosses (good luck with that, and you only gain back a sliver) or to encounter an ally at the end of any given level. Needless to say most won’t even make it half way through Chapter one let alone see the game’s later stages.

At the time of its release the Last Battle looked pretty damn spectacular and wouldn’t have seemed out of place in the arcade. The game’s large sprites were a far cry from the days of 8-bit and the game does an excellent job of recreating the Mad Max inspired world of the manga although it isn’t long before most stages become simple palette swaps of each other. The first time I saw the multiple layers of scrolling in the backgrounds I about lost my shit. The animation on the other hand isn’t so great. Aarzak doesn’t so much throw a kick as his leg extends out of his erect body. Fodder enemies have stiff and limited movements

Fist of the North Star was an incredibly gory scenes with bodies exploding in a shower of blood and guts and sadly the Last Battle was heavily censored for its US release. Of course this was years before Mortal Kombat and Sega creating their own rating system so it was to be expected but still odd considering the NES game remained unscathed. Then again the graphics in that game were so crude I don’t think anyone involved gave a damn. Now rather than raining gore enemies simply fly off screen; it looks really goofy. Some of the bosses have been recolored red or green to give the appearance of a mutant or alien; these guys still swell up and explode. It’s hilariously inconsistent.

The Last Battle is simply a bad game that could have been decent and is rightfully forgotten. The Fist of the North Star license really just couldn’t catch a break with games like this only poisoning the well. It would be many years before the license would be done justice in the form of the import only PlayStation fighting game in 2000 and this game certainly didn’t help. Pass.