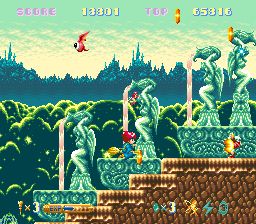 Like platformers starring Cavemen shooters starring witches at one point had their time in the spotlight, at least in Japan. A few would trickle over to the US like Magical Quest yet the granddaddy of them all, the Cotton series, has only seen one lone installment reach the US. Fantastic Night Dreams: Cotton had a limited release on the Turbo CD and is one of the rarest games of all time, which sucks as I’m sure its failure here kept the series exclusively in Japan. That meant we were denied brilliant games such as Marchen Adventure Cotton 100%. This remake of the arcade and Turbo CD game is fantastic and one of the best shooters for the SNES. Plus it requires no Japanese knowledge to enjoy.

The witch Cotton is a bit of a moron. The fairies of the forest have come seeking her help to save the country. Somehow Cotton mistakes their plea for help as a mission to gather as much of her favorite candy Willow possible. Yeah.

The story is silly and the game’s art design was changed to match. The overly dark art direction of the original Cotton has given way to a fantastic visual makeover that is simply put phenomenal. The game is a literal explosion of color as the SNES color palette is given a workout giving life to the vivid backdrops of each stage. You would think the at times pastel art would clash with the darker themed enemies however the two blend together brilliantly to create something even better. This is still technically a remake so all of the familiar sights and sounds of the PC Engine and arcade game are here but overhauled with many layers of gorgeous parallax scrolling. The level of detail is nearly unmatched on the SNES and the game only slows down during its most hectic moments. This is a first class production all around.

While there are some surface similarities to Gradius Cotton is its own beast. Cotton differs from other shooters in the sense that you aren’t collecting any special weapons but instead upgrading your current one. Crystals dropped by enemies grant experience that will power up your primary shot and bombs for ground targets and thankfully they only come in two colors here. Your powers can be leveled up to three times with death setting you back one level. That sounds minor at first but can quickly spiral into an unwinnable scenario during protracted boss battles.

At the start you have a choice of 4 groupings of 3 magic spells which also affects the movement of your fairies. These spells range in effectiveness from the focused fire dragon, thunder, barrier, to the situationally useful twinkle stars. The magic spells in the game are grossly overpowered, able to bring any boss close to death in a single hit. I suppose the designer’s way of managing this was to make spell power-ups incredibly rare until late in the game but it’s easy to hold on to at least one charge to make the end level bosses simple. Up to three fairies can fight by your side with their orientation at your command although they blend into the backgrounds so much that it is easy to get lost in the chaos.

Aside from the graphical makeover the biggest change to the game comes in its controls. Thanks to the SNES controller’s six buttons everything has been mapped separately adding extra options and making the game far more intuitive. You can now freely select which of your spells to use as well as reposition your fairies. Autofire and bombing also have their own buttons this time as well. It sounds minor but for anyone who has had to fidget with games like Forgotten Worlds on both the Turbo CD and Genesis it is a huge boon.

The game’s pace is laid back and slow, akin to an amusement park ride with highs and lows in terms of moments of tension. The first few levels are admittedly a bit too laid back, asking very little of the player other than occasionally moving up and down to avoid enemy fire. Even the mid and end level bosses pose little threat. At about the halfway point it is like the game has received a shot of adrenaline as a seemingly endless line of enemies close in for the attack. While normally ground targets and their weapons can be easily avoided later in the game they actually pose the largest threat. The environment also becomes a factor as gusts of water threaten to push you into stray bullets or you accidently fly into spewing molten rocks. If the early stages of the game were even slightly as intense as its back half this would have been phenomenal as the mechanics are incredibly fun to play around with.

Overall in spite of the more densely packed second half the challenge is fairly moderate. Although you die from a single hit you instantly respawn and the game is generous with extra lives. The game’s slower pace allows you to see danger coming ahead of time and aside from the times you might get greedy and rush after coins you probably won’t die often. Even the bosses aren’t as big a threat as they should be considering their size. Their attacks are telegraphed well in advance and provided you’ve kept magic in stock you can almost defeat them with a single spell. I’m certainly not complaining despite how this sounds; I’m used to shooters kicking my ass thoroughly so the more laid back pacing here is a welcome change and is more inviting to novices of the genre.

This is one of the strongest shooters for the SNES and one well worth your time if you have an even a passing interest in the genre. With fantastic art direction, good music and an even challenge there’s plenty to love about Cotton 100%.