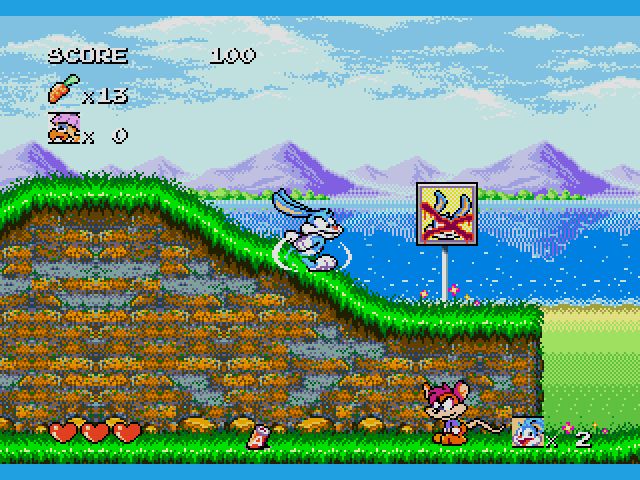 I’ve never envied developers who have to create games based on licenses. Some like DuckTales practically lend themselves to an epic adventure due to the nature of the show. But then there are the likes of the Little Mermaid and Chicken Little; how the hell do you make those compelling? Tiny Toons could easily have fallen into that same category however Konami turned out a few gems with the property. I found the NES game fairly generic but Buster Busts Loose was excellent. For Sega fans Konami produced Buster’s Hidden Treasure, a fun romp that takes more than a few cues from Sega.

Buster Bunny finds a treasure map in Acme Looniversity but is sideswiped by Montana Max, who enlists the aid of Dr. Gene Splicer to hold him off. Splicer has brainwashed all of Buster’s friends to aid him in this endeavor but that won’t stop Buster from saving his friends and finding the treasure before his arch nemesis.

Whereas Buster Busts Loose could almost pass for a lost episode of the cartoon Konami went in a different direction for its Sega counterpart. It’s not a stretch to say that Buster’s Hidden Treasure borrows heavily from Sonic the Hedgehog except it stars a blue rabbit. While normally such derivative titles pale in comparison to their source material (Socket) there are enough unique elements here that help the game stand on its own two feet. Buster’s Hidden Treasure doesn’t reinvent the platforming wheel but greases it enough to entertain for you for a good few hours as it is pretty long.

As much as I want to avoid the comparisons to Sonic it can’t be helped. Buster Bunny builds up speed as he runs like a certain blue Hedgehog although not as fast and can execute a slide attack at full speed. In some ways I wonder why the slide was included as I almost never used it. While blazing through the stages at a brisk clip sounds nice the level design was not built with that in mind, to the point where I question why you even have the option. At almost every turn there is a shovel, can of soda or some enemy to trip you up, as if the designers are wagging their fingers and saying “this is not that type of game.” The end level bosses see Gene Splicer controlling one of the other Tiny Toons and piloting some new contraption; sound familiar?

Luckily the level design is where the game really shines. The 33 or so stages cover a wide spectrum with each new area presenting some new obstacle to deal with, be it lava, ice or spikes. The carrots strewn about don’t grant extra lives but instead an extra use for your helper character not that is ever necessary. There are a ton of secrets at every turn and if need be you can revisit prior levels to stock up on extra lives or life extending hearts. The tight controls mean if you die it was your own fault although I noticed later in the game there are more leaps of faith than should be normal.

For the most part the game is of median difficulty as there are frequent hearts to restore health and a decent amount of checkpoints. At the halfway point the difficulty is stepped up as enemies appear in greater numbers and are more aggressive. The level design becomes far trickier with more instant death spikes and such and the boss battles feature more involved mechanics. Some of the later areas such as Montana Max’s factory tend to run a little too long for my taste but I suppose it does succeed in creating the sense that it is leading to an epic finale. Between the game’s length and increasing challenge you’ll certainly get your money’s worth.

The game does an excellent job of recreating the look of the show despite being set outside of Acme Acres. The sprites are large and expressive with Buster shamelessly stealing a few of Sonic’s animations. Most of the principle cast from the show make cameo appearances as bosses or can be called in for an assist which is pretty cool. Too bad most of the enemies you’ll face are generic fodder. While the environments run through most of the standard platforming clichés they are at least backed up by Konami’s awesome art. Even the music is pretty cool; Konami was on fire at this point and as Rocket Knight Adventure and Castlevania Bloodlines showed they had the Genesis hardware dialed in.

Buster’s Hidden Treasure is a solid platformer that while derivative is fun above all else. It brings nothing new to the genre but hits all the right notes to create a game that even those who have never watched the cartoon can enjoy.