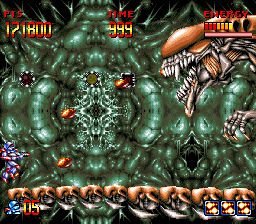 After the nightmare of playing the original Turrican on both the Genesis and Turbo Grafx-16 I thought for sure the rest of the world was nuts in their love for this series. I realize to some extent you had to be there at the game’s original release on the Commodore 64 and other UK computer formats to appreciate the game’s mechanics but even taking that into account there are glaring flaws I found hard to ignore. So imagine my surprise when the following console sequels would go on to become some of my favorite action games of that era. As one of Factor 5’s earliest console efforts Super Turrican is one of the best action games for the SNES and one that seems to have been lost in the shuffle.

Despite the title this is not simply an enhanced port of the first game but a weird amalgamation of elements from both Turrican and Mega Turrican. Fitting as both games were in development around the same time. The game doesn’t completely go the action focused route of MT and still keeps a lot of what made Turrican unique such as the wide open levels full of secrets. Although it isn’t as polished as that game due to the mélange of ideas from two separate games it is still an all-around excellent title and one of the better games in the series.

Nearly all of the flaws inherit in the original Turrican have been fixed creating a much more pleasant experience. Your life bar is separated into individual digits rather than one continuous bar. To go along with that getting hit gives you a moment of invulnerability making it almost impossible to have your life drained in 2 seconds. This was my main gripe with Turrican and the game is infinitely more playable thanks to the change. Depending on the strength of the attack your health is depleted in different increments to balance it out but on average you can sustain four or five hits before death.

The primary weapons have been slightly redesigned and are both still familiar yet packing more of a punch. The spread shot is still the same as ever, covering a wide range but lacking in power. The reflecting shot is both bigger and fires rapidly, making it more effective in certain tight situations. The laser beam has been changed to bursts of energy fired in rapid succession that is incredibly powerful rather than a straight beam of light. The lightning whip is instead a freeze beam that immobilizes enemies but doesn’t inflict damage. This change doesn’t quite work out as it is rarely ever useful and I more or less forgot about it completely after the first ten minutes. The “morph” ball can now drop bombs similar to Samus (oh boy) and is governed by a special meter rather than a strict number of uses. It makes it a far more integral part of your tool kit rather than a last resort.

The level design is a best of both worlds approach in terms of action game design. The majority of the worlds keep the wide open approach that made the series famous.   Though not as spacious there are still plenty of item boxes to use as stepping stones to find gems and alternate paths through each of the levels. Most of the levels are redesigned versions of Turrican’s more popular levels with the finale taken directly from Mega Turrican. It’s….. A direct Aliens rip-off, don’t let anyone tell you otherwise but is still pretty cool regardless. There are a smattering of straightforward action stages more akin to Contra throughout that are a taste of the direction the series would eventually go in. Some might poo poo their inclusion but I feel they are a nice change of pace.

The few original worlds made specifically for this game aren’t a direct fit and feel more like they were included as part of a checklist. The volcano world is the obligatory fire level every game seems to have while the ice world is full of requisite slippery slopes. However there is a cool stage where you must use the changing direction of the wind to assist in platforming. I actually would not have minded seeing more inspired mechanics like that to break up the monotony but I can see how Turrican purists would have felt otherwise.

Super Turrican is only let down by its brevity. With five main worlds with multiple sub levels each that seems like plenty for an action game but the truth is most will be able to finish the game in about 2 hours. That isn’t to say you won’t enjoy every moment of it but the game’s conclusion comes abruptly; not only is there no final confrontation with the Machine but there isn’t an ending either. This unfortunately comes from cuts made late in development; the 6-meg game had to be chopped down to 4, leaving an entire world and a few weapons on the cutting room floor. If only we received the full game that was originally planned, then Super Turrican would have truly been special.

Visually the game is spectacular, full of vibrant colors and detail the series had not traditionally seen before. The backgrounds are incredibly well designed and the bosses are screen filling monstrosities that are just as entertaining to fight as see in action. Surprisingly special effects such as Mode 7 are kept to a minimum and used sparingly; the popular giant fist at the end of the first world is comically small before zooming in to occupy the majority of the screen. Most impressive of all however is the lack of any slowdown no matter how intense the action. The excellent soundtrack is presented in Dolby Surround Sound and while it lacks the punch of Mega Turrican’s bass is still far above most music produced during that era.

Regardless of how much content had to be cut this is still one of the better action games for the Super NES. If given a choice between this and Mega Turrican that game wins out but ST is a close second and more than worth your time.