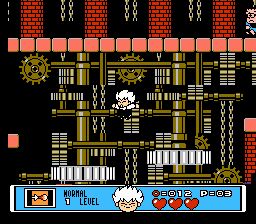 As one of the biggest supporters of the NES in America Konami released a host of titles in nearly every genre. They had so many games in fact that they created a second label (Ultra Games) to get around Nintendo’s 5 games a year limit. But even that wasn’t enough and many of their best titles remained overseas. Like they did with Gradius Konami created a parody of their ultra-serious Castlevania series titled Boku no Dracula which was scheduled for release here but ultimately cancelled. And just like Parodius Boku no Dracula manages to surpass its status as a spoof to become an excellent game in its own right. For some reason I confuse it with Drac’s Nite Out, another game starring Dracula except he was wearing Reebok Pumps for some god forsaken reason that was cancelled. I obviously never played that game but I’m pretty damn sure this turned out better.

The Demon King Kid Dracula has awoken after 10,000 years of sleep only to find a challenger to his rule. The Demon King Galamoth has taken over his kingdom and now Kid Dracula has to get it back. Those who have played Symphony of the Night will remember Galamoth as the lightning wielder bastard who was the most difficult boss in the entire game, with this marking his first appearance (albeit in cutesy form).

Calling the game a parody of Castlevania is a bit of a misnomer as they share almost nothing in common. This is a more light hearted action game starring an exuberantly happy young Dracula who looks more likely to have a sleepover than bite your neck. The first stage is clearly an homage to that series, mixing in elements from almost every level of the first adventure to give you a feeling of nostalgia before veering off into unknown territory.

Dracula’s offense is at first limited to a single multi-directional fireball that can be charged up for a bigger blast, inviting comparisons to Mega Man. While you aren’t stealing weapons from your fallen foes you do gain a new power after every level. These new abilities are pretty varied, from the homing shot that sacrifices power for tracking, the explosion which detonates on impact (and is a bit redundant as most enemies die in one shot) or the freezing shot which does exactly what the name suggests. Not every ability is offensive; you’ll gain the power to change into a bat for brief periods and to walk on ceilings as well.

You’ll get the chance to use everything in your arsenal thanks to the excellent level design. It should come as no surprise the game excels in this area as Konami are pros. You won’t explicitly need to use whatever new power you’ve gained in each successive level outside of a few outliers but they certainly make things easier. The difficulty is near perfect as the game isn’t so challenging that you’ll get frustrated but also isn’t a total cakewalk. The last level in particular is a bit insane considering you’ll have to face no less than three bosses before fighting Galamoth himself, all with a maximum of five hearts if you are lucky.

Though most of its gameplay elements have little to do with its (loose) Castlevania roots this does share some of that series’ traits. Getting hit will cause you to recoil which can lead to many a frustrating death. You still maintain some control when you jump but many of the game’s platforming sequences require expert timing.

There’s a certain charm to the game that just makes it so enjoyable that it’s hard to describe. The journey to fight Galamoth covers nearly every platforming trope and you would think Dracula underwater or fighting headless mummies in Egyptian pyramids would be ridiculous but somehow it works. There’s a certain whimsy to the proceedings as you ride a hellish roller coaster, fight Ku Klux Klan ghosts (!), and even travel to space for the final showdown.

The entire New York City level is a giant what the fuck moment. The primary antagonists are UFOs that spawn power ranger looking aliens. As you combat them you’ll also deal with random gorillas and other aliens that do their best to imitate Spider-Man. This is followed up by a train ride from hell and culminates with game show style quiz from the Statue of Liberty. I swear I did not make any of that up.

The presentation is solid if a bit simple. Everything has been given a cheery veneer despite the danger they pose with big sprites compensating for the lacking background detail. The animation is the real star of the game with exaggerated reactions from hits and smooth moves. The music features is generally pleasant with some remixed tunes from Castlevania making it over however the rest of the soundtrack stands on its own.

We’ll never know why Boku no Dracula was cancelled but its absence overseas is definitely missed. It’s a sight better than crap like Top Gun and Bayou Billy; I would have trashed those games long before this if it were up to me.