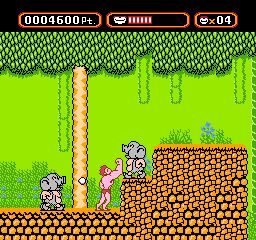 We’ve all had our moments of desperation. As little kids most of us only received new games on birthdays, Christmas, or the odd random holiday. Unless you were born with a silver spoon in your mouth, in which case fuck you. I’m kidding. To fill in that dead time you either had to trade games with friends or rent them. But that will only get you so far.

Back in the day new game releases weren’t as frequent so eventually you’ll have either burned through your friend’s collections or exhausted all the good options at Blockbuster video. When you’re dying for some new entertainment eventually anything will do. Suddenly that dirty old copy of Master Chu and the Drunkard Hu starts looking good. I found myself in just such a predicament, except my poison was Amagon.

You are Amagon (what the hell kind of name is Amagon?), a marine who has crashed on a prehistoric island and need to get home. Unfortunately the rescue ship is on the other side of the island, meaning you’ll have to fight your way to a ticket home.

Make no mistake, this game is bad. Whether it’s the terrible game balance or the just plain uninspired action there really is nothing of merit to this game. The only reason I even bothered to play it is sheer boredom. I needed a new game to play and my next door neighbor had it and the rest is history. Sometimes it really is better to just replay a classic like Ninja Gaiden or let the Grim Reaper kick your teeth in for the umpteenth time in Castlevania than waste a perfectly good afternoon with a turd.

As Amagon you’re only armed with a machine gun with limited ammo. For the most part enemies drop ammo frequently enough that you won’t have to worry about it too much early on but by the middle of the game that stops. There are very few actual power-ups; just extra points which are important, extra lives, ammo, and the all-important mega key.

The mega key allows you to change into Megagon provided you have enough points and the requisite power-up. Megagon is a beefed up version of Amagon, able to jump higher, hit harder, and with an actual life bar. The higher your score the more health Megagon will have. In addition he can sacrifice a little life to fire a wave attack that can destroy nearly anything in its path.

While the idea that better play will enable you to use your best power-up more frequently is good the game seems balanced around Megagon. The deeper you progress the more you’ll fight enemies that are basically bullet sponges, sometimes in pairs of two. It seems a bit unfair to have to waste a fourth of your bullets on two or three enemies if you aren’t Megagon but you are presented with these situations frequently. Sometimes it comes down to sheer luck whether a Mega key will drop meaning you might have to complete a good portion of a level before the option presents itself.

It’s a situation that sucks because this is not an easy game. Most of it comes from the bad game balance but the sloppy controls don’t help either. Both Amagon and Megagon have these weird leaping arcs that end in a dead drop. There are far too many cases where it feels as though you just made the edge of that platform even though you’ve inched as close to the edge as possible.

Running out of bullets does eventually become a concern and if that happens kill yourself; trying to pistol whip enemies without getting hit is an exercise in futility. This impacts the rest of the game since you need to rack up as high a score as possible to be effective as Megagon. It’s pretty stupid to find a Mega key at the beginning of a level since you’ll have maybe two hit points at best. You’ll end up saving it to close to the end, which defeats the purpose. Speaking of ends, the end level bosses are virtually impossible as Amagon, once again reinforcing the need for those damn keys.

As much as the tone of this review might indicate I had no intention of hating Amagon. But the lists of issues with the game stack up and make the whole experience crumble. This was not a good game then and it isn’t now.