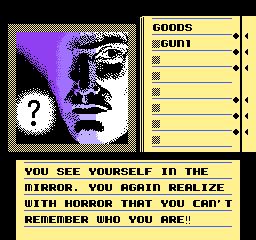 Of all the Macventure ports to the NES Déjà vu is my favorite. I love period piece movies and Déjà vu definitely follows in the same vein. While I like Shadowgate and the Uninvited the ambiguity regarding exactly when each game takes place as well as the world surrounding the events that transpire left me feeling a little empty. The relatively modern setting of Déjà gives it the sense that this could happen to you and makes it more relatable.

You awake in a decrepit bathroom with a splitting headache and no idea how you even got there. Even worse, a quick look in the mirror and you realize you have no idea who you are! The blood on your hand and the dead man in the adjacent office aren’t reassuring and now you are on a race against time to not only recover your lost memories but also stay one step ahead of the police in an evolving murder mystery that pins you as the prime suspect.

This is a much more mature plot than the entirety of the NES library which is surprising considering how aggressively Nintendo of America censored games back then. There are constant references to murder, with the plot covering gambling, extortion, and kidnapping. There are some inconsistencies in terms of censorship; if you examine your arm you’ll find needle marks yet all references to syringes have been removed. The death scenes have been toned down yet Uninvited makes this look tame in comparison.

While amnesia as a plot device has overstayed its welcome thanks in no part to Square Enix RPGs in the 80s it still felt relatively new. Set in the 1940s Déjà vu absolutely nails its setting through its UI and atmosphere. As a detective game the UI is presented as though it were pages in Ace Harding’s notebook. Even the descriptive text appears as though it is being written on a typewriter, a pretty nice touch. The game’s dialogue has an old time slant to it that is pretty endearing although humor is kept to a minimum.

As a detective in a murder mystery you’ll spend more time looking for clues and items rather than solving complex puzzles. This is the game’s primary distinction from its two MacVenture cousins and one that actually makes the game more difficult and tedious. Because you’ll spend copious amounts of time combing every inch of each location and pouring over the various notes and such you find it brings out the worst aspect of console point and click games, the controls. Navigating with the D-pad is a poor substitute for a mouse and the slow cursor doesn’t do it any favors as you thumb through the many pages of your expanding inventory. It’s a problem that can’t be helped but luckily the story and the pacing make up for it.

Unlike Shadowgate and Uninvited the game doesn’t take place in a single location with further locales opening up as you discover their addresses. I do find it odd that supposedly the police are on the lookout for a man matching your description yet never actively harass you unless you blatantly commit a crime. Beyond the threat of spending life in jail the streets are dangerous with muggers and bums, and hookers with a grudge lying in wait. Currency plays a role since you have to pay the taxi driver a few coins for his trouble. The only way to earn more is to play the slot machine in the basement casino and while it’s possible to go completely broke there are a few fail safes to still help you get around, namely another taxi that offers free rides. It a convenient mechanism to avoid having to restart the game like many of the PC adventure games of the time.

There are plenty of ways to die, some pretty hilarious but it does get pretty frustrating just how many sudden deaths can occur at a moment’s notice. The end of the game in particular is pretty frustrating; you need to drop all of the incriminating evidence against you before heading to the police but the game never states where or what items. Despite the shift in focus from puzzle solving I found this to be far more difficult than the other two games mostly due to the constant back and forth between locations. It’s very easy to forget to check a draw or locker and miss out on a crucial clue needed to trigger the next event. Some of the clues in the game can be pretty obtuse but in all honesty that is par for the course within the genre.

Déjà vu is the best point and click game for the NES in my opinion, even better than Maniac Mansion. The story is tense and manages to overcome the cumbersome interface to hook you into following Ace Harding’s journey to its conclusion.