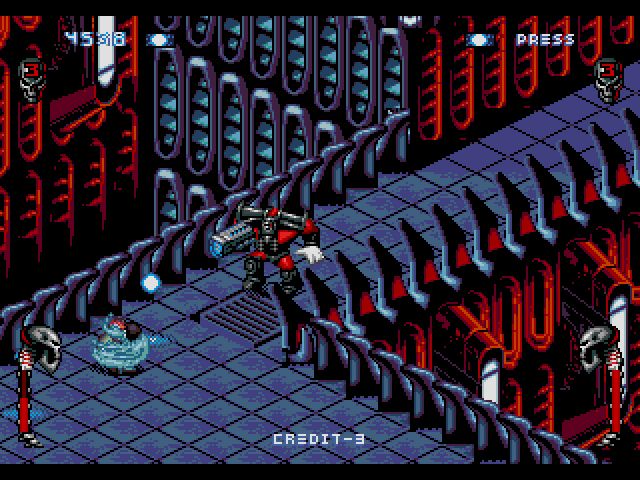 Long before Core Design became synonymous with Lara Croft they were one of Sega’s strongest supporters, releasing a string of quality titles on both the Genesis and Sega CD. While Tomb Raider came out of nowhere and shocked the industry those who had followed the company knew at one point they constantly pushed technical boundaries. In 1995 they ported their Amiga hit Skeleton Krew to the Genesis with not much lost in the translation surprisingly. With its gritty art style and dark color palette it was a perfect match for the system but suffers a bit in the design department.

In the year 2062 a former mortician named Moribund Kadaver (seriously?) has taken over a cryogenics plant and used its resources to unleash a never ending supply of mutants on Monstro City. The Military Ascertainment Department calls upon the mercenary Skeleton Krew to track down Kadaver and end his plans for domination.

Skeleton Krew wears its death theme proudly and places it front and center. There are more skulls and chains than at a death metal concert. This is a hardcore action game and don’t you forget it! The game’s premise and story are only touched on briefly in the intro and vaguely at that. It’s never brought up again and doesn’t really provide any context to the locations you’re visiting. The entire game feels directionless and combined with its quirky controls will make you wonder why it sells for so much on Ebay aside from its slight rarity.

You have your pick of any of the game’s three protagonists and as you can expect they all fit into established tropes. Team leader Spine is your everyman, good at all things but excels in none. Joint is the token strong man who packs a punch but moves slower than a turtle. And the lone female Rib, get this, is incredibly fast but weak. I know, shocking. Each comes with a different standard weapon with grenades as secondary. Honestly they look slightly different but the weapons all seem to function the same. The grenades are near useless since there’s a few second delay before they explode and considering the amount of crap tossed your way you can’t afford to wait. Get used to these weapons as there are no power-ups at all which is intensely disappointing.

The controls take some getting used to. You can strafe but can’t move and shoot independently. You can sort of use the A and C buttons to control your rotation but that requires some insane finger gymnastics and the game’s pace won’t allow it. There are a number of control setups in the options with some making use of the six button controller but the button arrangements make little sense. If you could map them yourself this would be golden. The default setup certainly isn’t intuitive but can be manageable in time. This is the type of game dual analog controllers were made for too bad we were still a few years off from that.

My primary gripe with the game is that outside of one or two levels most are aimless. You aren’t given any explanation as to what your goal on each stage is and so wander around and eventually stumble into it. The levels are pretty spacious and hunting down random terminals or abstract parts of the background that need to be destroyed becomes tedious. All the while the enemies respawn infinitely. The objectives once it gets down to it are repetitive; most of the time you are simply destroying generators before advancing to the next planet. Boss battles are few in number but memorable; if they occurred at the end of every stage it would have broken up the monotony considerably.

Despite covering only six levels Skeleton Krew is blistering hard. You only get 3 lives and 3 continues although these are renewed if you use a password. There are no power-ups whatsoever; weapons or life refills included. There’s a lot of shit thrown at you at once as early as the second level, to the point where it’s hard to even see your character amidst the chaos and easily lose a life or two in the process. Combined with the lack of any direction given and you’ll end up wasting continues just trying to figure out what the hell you need to do or where to go. Even so there are ways to game the system so I can see most completing the game in an afternoon.

While the controls and gameplay have their issues visually Skeleton Krew is spectacular. The game is full of superb artwork with a level of detail few games of the era can match. There’s a heavy comic book inspired vibe to the game’s look that is certainly unique and gives it a cohesive feel. The few bosses in the game are large monstrosities that are insanely detailed and a nice change of pace. The frame rate is rock solid and only chugs at the worst moments in coop play. As was mentioned before its heavy on the skull and death imagery and it can grow tiresome but the environments are varied enough that it won’t matter. The technical prowess that Core exhibited with the Sega CD was brought to bear here, producing one of the top visual extravaganzas for the system. The music is disappointing; you would expect banging death metal to accompany the darker tone but instead you are treated to generic synth rock that lays in the background and dies.

Skeleton Krew has its good and bad points and it is up to you to decide if the game is for you. Despite its faults I still managed to enjoy it, especially since it is so short. But the game is exceedingly expensive and for a fraction of the price you could by both Smash TV and Soldiers of Fortune, both similar and superior games.