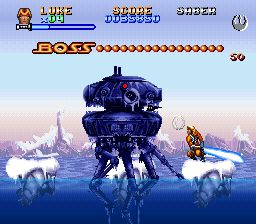 Once Super Star Wars was released everyone knew it was a question of when and not if they would produce a sequel. The Empire Strikes Back has gone on to become the most beloved film in the original trilogy and I’m sure many expected the same of the game. It lives up to expectations in some respects and fixes a few of its predecessor’s flaws but at the same time has issues of its own that mar the experience.

Where the first game took certain liberties when following the plot of the film Super Empire Strikes Back is a more faithful adaptation to an insane degree.   You still begin the movie as Luke Skywalker and the rebels on Hoth but will eventually visit Yoda on Dagobah and finally Cloud City on Bespin for the conclusion. Because of its strict adherence to the movie’s events you can no longer freely select a character for each level and must play them as the game dictates.

Thankfully more has been done to make each hero unique. All characters can double jump which helps tremendously with the frequent platforming. Both Han Solo and Chewbacca start off at blaster level two while Luke has to work his way up from a petty laser. Luke begins the game with his lightsaber this time around and can freely switch between it and his blaster. Han has a defensive roll instead of a slide like Luke. Chewbacca has a spinning clothesline that makes him temporarily invincible while Han has an exhaustible supply of grenades. Once Luke reaches Dagobah you’ll have access to a range of force powers with most of them being indispensable. Healing, Levitation, slowing time, you can even turn invisible and avoid enemies briefly which is a god send at times. These are governed by a separate force meter that is replenished by items at a decent clip.

Aside from the changes in character abilities this is pretty similar to the first game. This is still primarily a run and gun platformer broken up occasionally by vehicle based levels. There is no time limit this time and passwords will record progress. Power-ups are in shorter supply this time around and hearts restore less health which has a massive effect on the game’s difficulty. The snowspeeder and X-Wing levels are mild fun but dated; once you’ve used a tow cable to destroy an AT-AT in 3D at 60fps it’s hard to go back to choppy Mode 7. For its time though these stages were as close as you could get to the film.

Even more so than its predecessor the Empire Strikes Back is an incredibly difficult game, and one of the hardest SNES games in my opinion. You rarely get a moment’s respite from the infinite horde of enemies and honestly it is more aggravating than a welcome challenge, especially when even the debris from fallen enemies can damage you. The platforming segments are made all the more frustrating by respawning enemies and the threat of being frozen or pushed off a ledge. The game is heavily balanced toward Luke since the lightsaber is more effective in many situations. Blaster power-ups are in rare supply so both Han and Chewbacca feel underpowered for long stretches. As Luke once you gain your force powers it becomes easier since you can heal and save yourself from a pit with levitation. .

Despite the improvements in control the extreme difficulty is mostly a result of bad design choices. On nearly every level there are hazards that sprout from the ground and can sap your health in seconds. This is especially bad on Hoth, which comprises a third of the game. Whoever placed so many ice crystals in every stage needs to be shot. Boss battles are drawn out since you need to dismantle many of the larger metal contraptions in sections before you can actually inflict damage. Figuring out how to do that will result in many wasted lives as it isn’t always apparent where you need to hit. Trial and error is natural for progression but here it doesn’t feel as rewarding.

Had the difficulty been more manageable than the pacing problems with the game could be overlooked. A significant portion of the game takes place on Hoth where the majority of the frustrations with the game will occur. Granted I realize the developers were hamstrung by the movie’s plot and to their credit they do a good job of varying up the levels somewhat but you’ll grow tired of the constant ice stages. There was really no need to spend a few levels leaving the rebel base with Luke only to have to do the same thing with Han Solo directly after. Smaller scenes from the film form the basis for certain levels such as Chewbacca’s search for C3PO in the furnace room. That’s all well and good but these stages are gruelingly long. Overall there are about 20 or 21 stages in the game when that could easily have been cut in half. At least there are passwords to chart your progress but I reason most won’t have it in them to finish the game.

Super Star Wars was already a brilliant game visually and ESB easily surpasses it. There is far more detail in the game’s backgrounds than before and despite spending multiple stages in each of the three planets (Hoth, Dagobah, Bespin) the artists have done a good job of varying the environments. As a result of the film’s plot you’ll face more mechanical bosses this time around than oversized beasts which does hurt the game as they feel repetitive despite their unique designs. The Mode 7 vehicle levels of the first game have returned and are more visually spectacular if you can believe it. Hoth’s surface has rolling hills and peaks and you can fly above or below the clouds of Bespin. The only lackluster one in the bunch is the first person dogfight in the Millenium Falcon which simply isn’t as inspired as the other two.

The sweeping soundtrack of the film has been expertly carried over to the SNES and is simply astounding in its clarity. Hearing the Imperial March at the title screen in all its glory is still impressive today. The sound effects have seen a similar increase in fidelity and there is a noted increase in the amount of sampled speech.

In some respects this is a better game than Super Star Wars. But because of the myriad number of smaller issues that add up to create an extremely frustrating experience I would still recommend that game over this.  Super Empire Strikes Back is still a good game but you need to know what you are in for when picking it up.