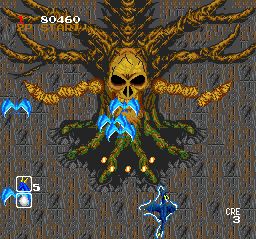 I loved Dragon Spirit in the arcade and at home in both of its ports. So when Dragon Saber hit the arcade I was ecstatic but also anticipated a home port like before. Sadly it never came, at least not in the US. Dragon Saber’s PC Engine port would remain a Japanese exclusive and while there were no shortage of shooters for the system in America I’m sure they could have made room for one more, especially a quality title like this. While it lacks the arcade game’s visual splendor this is still a solid title worth checking out for fans of the genre.

At first glance Dragon Saber doesn’t seem or look all too different from its predecessor. In fact the first stage of both games is eerily similar thematically and to serve as an introductory to the game’s mechanics. However many small tweaks have been added make the sum greater than the whole. You can now sustain three hits before death rather than two which is huge boost to your survival. The standard fiery breath is joined by a power shot which charges automatically when you aren’t firing. It’s a huge risk to take but always worth it in my opinion. The largest gain comes with two-player coop which not only doubles the fun but improves your chances of survival.

Dragon Spirit had a host of power-ups that altered your dragon’s form with most going underutilized for the length of the game. Not so here. There are a slew of new dragon power-ups with nearly every one making at least one appearance in each of the game’s nine levels. So many in fact that it becomes hard to remember which does what as the icons aren’t the most telling in some cases. As an added bonus each has their own special charged shot with some being particularly devastating. The Thunder dragon’s charged attack is essentially a smart bomb meanwhile the blue trident will unleash a massive blue dragon that covers nearly the entire screen. You’ll end up choosing a given weapon more for its special properties than its immediate effects and thankfully the game gives you plenty of opportunities to switch and play around.

Dragon Saber is slower and more deliberately paced than most shooters but that doesn’t have any effect on the intensity of its action. In the arcade each stage was actually pretty short but for the home port they have been extended, some to a grueling extent. The game does a much better job of forcing you to prioritize either ground or air targets and the environment is just as deadly as the enemies you’ll face. I will say some stages tend to drag on far too long such as stage 3 and the ice caverns of stage 6. It is in these instances that the game’s punishing difficulty becomes more apparent.

Dragon Spirit was especially hard and in this area Dragon saber isn’t all too different. This is still a pretty brutal game but to some extent it isn’t as bad as the first one. That’s not saying much however. The charge shot helps a bit and power-ups are far more frequent yet you’ll still end up seeing the game over screen pretty frequently. Decreasing your life bar from the arcade’s five hits certainly didn’t help either. The last three or four levels in particular are a nightmare; if you can finish the game on one credit I tip my hat to you because you are a god among men. The game is actually a lot easier in coop not just because two heads are better than one (heh) but because so long as one of you is still alive you aren’t sent back to a checkpoint on death.

Visually Namco has done a good job of converting the arcade’s pretty spectacular visuals home but the loss in detail is very noticeable. The gorgeous parallax backdrops are completely gone; this is a huge blow as what is left is completely flat and lifeless. While the change in resolution is to be expected the smaller sprites and loss of detail in the game’s amazing boss designs can’t be ignored. Some of the more impressive visual effects had to be removed due to the system’s lack of scaling such as stage five’s canyon dive. It isn’t all negative however. The game’s varied art direction still shines through as the more subdued beginning levels quickly give way to more fantastical environments such as the inside of a demon and an oddly out of place futuristic castle filled with mechanical contraptions and automatons. The sound track is similarly excellent with a rousing and heroic score that completely fits the action.

While Dragon Saber doesn’t seem to add much to the series formula there are enough little additions here and there that alter the game’s “feel” and avoid seeming like a rehash. It also helps that it is a solid game as well. Although it is far from one of the best shooters for the system it also well above average tripe like Ordyne and Dead Moon. This is a journey well worth your time.