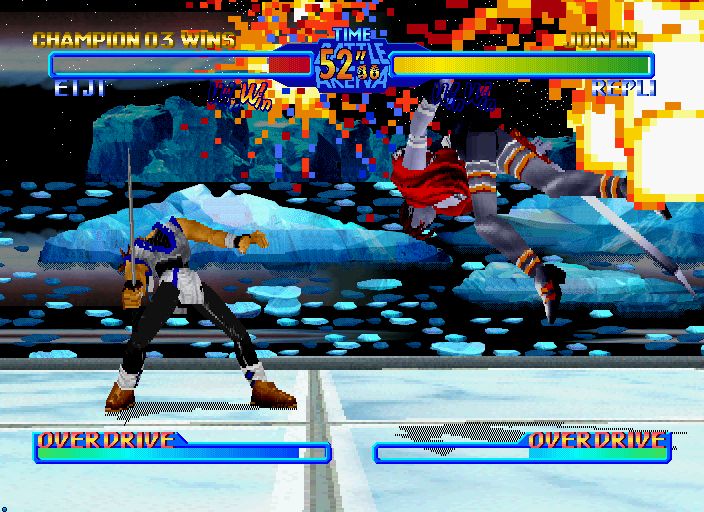 Toshinden URA what? It sure as hell isn’t a good fighting game. The jokes can practically write themselves. Battle Arena Toshinden managed to fool thousands with its arcade quality graphics but it didn’t take long before everyone realized the gameplay was shallower than a kiddie pool. By the time Toshinden 2 came around better 3d fighters such as Tekken 2, Virtua Fighter 2, and Soul Edge had shown us just how great a polygonal fighting game could be. The only thing it had going for it was its incredible graphics to which it wasn’t anything special at that point. The Saturn edition was supposed to be a special version of the game tailored specifically to the system but somewhere along the way someone cheaped out and we wound up with one of the worst games in an already bad franchise.

While the URA in the title gives off the impression that this is a wholly original title the game is mostly based off of Toshinden 2 and in its own strange way is a direct sequel to Toshinden Remix for Saturn. This mostly equates to a slightly different roster of final bosses and a changed story however the gameplay additions of the 2nd installment have been brought over. Not that it makes much of a difference as there is no depth to the combat and everything simply doesn’t flow properly.

The principle cast of the original is joined by three newcomers. Ron Ron is a teenage police scientist (I don’t buy it in the slightest) who even back then was pandering to a specific audience. Her attacks are some of the most appallingly animated in the game and are easy to dodge making her useless. Ripper looks cool but suffers from a long buildup in his special attacks. Tracy plays identically as she did in part 2 and by default is one of the better characters in the game. Sadly Chaos did not make the cut. The end game bosses are unique to this version and while that should be cause for celebration they are weak. Replicant is a robotic version of Sho while Wolf has some of the coolest special attacks in the game but his movement takes some getting used to.

At least some effort was made to correct the flaws of the original as the game is somewhat competent. The gameplay additions from Toshinden 2 such as dash in moves, taunts, and an overdrive meter have been brought over. The 3d dodge no longer grants temporary invincibility so its use has to be more strategic. Most of the returning cast have been given one or two new special moves or had subtle changes to their existing repertoire. The more powerful attacks have a slight charge time adding an element of risk and reward in their use. You’ll also have to be wary of your proximity to the edges of the ring since some moves cover a wide distance. Unlike the first game it is possible to execute simple combos and two-in-ones although it never really feels satisfying and more like a happy accident than a work of skill. Unfortunately you’ll never need to even bother trying these advanced tactics as the AI is some of the dumbest I’ve ever encountered in a fighting game.

I had always been curious as to just how accurate the magazine claims were that they could beat the game using nothing but the same special move over and over. Sure enough mapping a given character’s projectile attack to your button of choice and spamming it will result in victory with little effort. At most you’ll have to take an occasional swipe if your opponent gets too close. I used this “strategy” with six characters and it never failed. The AI is so dumb I have seen it run out of the ring for no apparent reason numerous times. The only reason to run through the single player mode is to unlock all the characters for multiplayer and even then some are so completely unbalanced (Vermillion) that it simply isn’t fun. A fighting game that fails to be entertaining even in multiplayer is basically worthless.

There were lofty promises made about the game’s graphics as it was supposedly going to use the same high resolution mode as Virtua Fighter 2 with full 3d backgrounds. The only thing high resolution here are the 2d backgrounds and the front end menus. The game is a far cry from 60 frames per second; it’s more like 30 with frequent drops and the game has some seriously choppy animation. Toshinden Remix proved beyond a shadow of a doubt that the Saturn hardware was weaker than the PlayStation with its reduced polygon counts and missing special effects. That drab look continues here as projectiles and special moves lack real time lighting and transparency and look incredibly ugly; most attacks devolve into an ugly mess of pixelated blobs..

The one area that this series has excelled in, character design and art can’t even be appreciated as the character select screen is ruined by hideous, low resolution pixelated renders that barely resemble each fighter. There’s a decent amount of FMV but even by Saturn standards it is insanely grainy and looks low quality; honestly they shouldn’t have even bothered. At the very least the character models are solid but that doesn’t make up for the rest of the lacking visual presentation.

This series has always had outstanding music and that track record continues here. Most of the music is borrowed from prior installments of the series but remixed to great effect. The only oddity is that the music restarts every round so at most you’ll only hear 15-20 seconds of each theme unless you pop the disc in a CD player.

There is nothing here worth exploring as there are far better fighting games on the Saturn. I wouldn’t even recommend this game to Toshinden fans if they even exist.