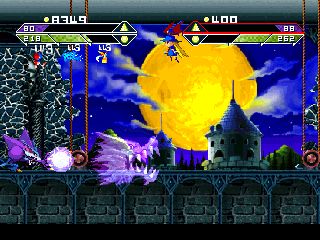 It was a sad day when Treasure’s Silhouette Mirage was passed over for US release. As the Saturn floundered in America at the very least Sega still provided a consistent calendar of releases to appease fans. Outside of one or two outliers all of some Treasure’s output came over but it just wasn’t meant to be. In the case of Silhouette Mirage was even worse; this is what the system was born to do yet it seemed destined to stay in Japan. Little did we know that this brilliant game would see international shores but not on its original platform. Enter Working Designs, who would publish the PlayStation port in 1999. While it has its flaws the brilliant gameplay still shines, leaving the game one of the system’s biggest undiscovered gems.

In the year 2000 a group of scientists create a computer called Edo which conducts experiments that eventually result in the population of the world obtaining one of two attributes, silhouette and mirage. Eventually war breaks out between the two factions with the world on the brink of chaos. Shyna Nera Shyna, the messenger of justice, awakens from hyper sleep in order to bring order to this chaos and repair the Edo system. Unfortunately the years have left her with memory loss and so she must find Edo with a little assistance from her helper Bug.

I still remember Gamefan’s October 1997 import coverage of the Saturn version of Silhouette Mirage. It was vintage Treasure, a genre breaking game that was completely unique from everything else in the category. The game certainly lived up to the hype and I anticipated its US release but the changes Working Designs instituted made the game far more frustrating rather than slightly more challenging as intended. Luckily it isn’t game breaking and the nuanced gameplay is still there to be enjoyed by all.

The game works on the concept of duality. Shine is equipped with both select and mirage attributes with the direction she is facing determining which you use. Attacking enemies with that of the same attribute will still spirit power at her while at home; using the opposite damage them. Spirit determines the power of your attacks with your weapons getting weaker and spirit is drained. The same applies to enemies as well and it is an excellent tactic to completely drain and the spirit causing them to deal zero damage.

Like Gunstar Heroes Shyna is agile and comes equipped with a bunch of hand to hand techniques. Aside from a slide and dash Shyna can triple jump, not that precise platforming is a major focus of the game. There are a variety of melee moves  with the most prominent being a throw and the cash bash. Throwing enemies allows you to attack without switching polarities; you can manually switch polarity at any time but it is slow and unwieldy. Tossing an enemy behind you is far more effective. The cash bash allows you to shake down enemies for their money, including bosses. Money that you will need to buy better weapons and restore health.

There are a variety of secondary weapons that can be purchased at the numerous shops throughout each stage. The weapons, called parasites run the gamut from a boomerang powerful piercing laser, a home and shot and even a remote bomb. Each weapon increases in level on each stage of that increase comes an increase in becomes an increase in price as well, with Shyna only able to carry three. Parasites drain spirit at different increments and unfortunately in this regard working designs nearly broke the game.

As one of the many changes made to the game weapons drain spirit; in both the Saturn and Japanese PlayStation versions weapons had unlimited use. To be fair the weapons were drastically overpowered and made the game ridiculously easy. To make up for this so long as you attack with the same attribute you also drain spirit from enemies as well however most weapons use more than they drain, effectively making them useless in long spurts. The default weapon uses very little spirit and easily remains effective for the length of the game but it defeats the purpose of offering more powerful armaments if you can barely use them.

Another unpopular change that slows down the game considerably is the increased cost of everything in the shops. Unless you stop in cash bash nearly every single enemy you’ll barely have any money to afford even one weapon upgrade let alone refill your health. There are no health power ups and gain and unfortunately they don’t replenish your help after each stage either. Being forced to choose and a precious upgrade that you desperately need is dumb no matter how you slice it.

Yet in spite of these frustrations the game is still excellent. Up until the recent Outland there was nothing else like it. While the attribute system makes the game slower paced that was intentional; you have so many tools at your disposal that it gives you time to consider how you want to approach each encounter. The level design is similar to Alien Soldier in the sense that there are brief encounters with fodder enemies before the next boss encounter.

The boss encounters as in all Treasure games are the true star of the game. One of my personal favorites is samurai lizard Nardo. He appears to deliver punishment for causing a ruckus in the city at night but is so loud he wakes up the residents who throw various items at both of you, items that can (and probably will) take him out. Any encounter with your rival Zohar is memorable as he has the same dual powers as you and constantly switches up his attack pattern. The Attribute Gun is reminiscent of Seven Force in that it changes frequently and you have to pay attention and react accordingly. These are the most challenging parts of the game and force you to really utilize the game’s mechanics in ways you never thought possible to survive.

Silhouette Mirage is one of the better looking 2d games for the PlayStation thanks to Treasure’s strong art direction and sprite work. The art in the game is superb and full of detail with vivid color and plenty of multi-jointed sprites as Treasure is wont to do. As good as the game looks it does come up short when compared to the Saturn original. There are entire background layers and objects missing from this release, leaving some levels feeling a bit empty. There are 2 exclusive bosses to make up for it but the lesser graphical polish can’t be denied.

The changes made are a love/hate affair (although with context I can sort of see why they were made) but in my opinion they don’t ruin this truly innovative game. Silhouette Mirage can be found dirt cheap and I’m sure those who try it will love it.