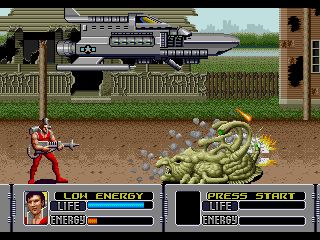 In the early years of the Genesis life Sega did not have it easy providing a steady stream of content.  Because of Nintendo’s strong arm tactics third party support was non-existent at first so in addition to their original home games Sega fell back on their arcade ports.  One such port was Alien Storm, which at first glance you would think is a run and gun like Contra but in actuality is a beat em up along the lines of Golden Axe.

Aliens have invaded Earth and the only thing that stands between them and world domination is the Alien Buster squad.  If you think about it, how can they be alien busters unless the planet is invaded on a regular basis?  Whatever.  In 1 or 2 player coop you take on the alien horde and save the planet.  Originally released in arcades in 1990 the Genesis version adds two more levels and another boss fight but in the end lives up to its arcade roots wholly, for better or worse.

At first glance things are deceptive.  All 3 characters are equipped with various weapons which would lead you to believe this is an action game along the lines of Contra.  However they are used for melee attacks, placing it in the same category as Streets of Rage or Golden Axe.  Each character has a variety of attacks using their unique weapons and are surprisingly nimble, able to dash, roll, and a combination of the two in a pinch which is uncharacteristic of the genre.  The only power-up in addition to extra health comes in the form of energy used to power your screen clearing special attack.  These are in somewhat of a steady supply so you can afford to use it often rather than being frugal.

Probably the greatest strength of Alien Strom would be its levels.  Each level takes you through a variety of gameplay set pieces, from the typical side scrolling to first person shooting sequences like Lethal Enforcers to run and gun sequences that finally allow you to use those guns to mow down enemies like you initially thought you would.  The shooting gallery areas allow you to go ape shit and destroy everything in the environment to find powerups and kill everything in sight.  Running and gunning down aliens is a blast as the pace is fast and is a brief but welcome change of pace.

Which points to the one big “flaw”; it’s short.  Sega tried to lengthen the game but with some (actually a lot) of perseverance you can finish the game in about 1 hour.  Most levels are only a few minutes in length even despite being broken down into multiple parts.  Since there are only 3 real boss battles they also tend to end abruptly.  The AI can be vicious, with massive amounts of enemies swarming you at once, which is probably why energy is so generous.  By the later stages you’ll probably spam your special attack repeatedly since the number of enemy waves becomes retarded.  I feel if they had worked on the two other parts of the game some more it would have become a stronger product as a whole, since one is too easy and the other is too hard.

It wasn’t anything special even during its initial release and it isn’t pretty but Alien Storm is still a good game that can be had dirt cheap so there isn’t really any reason to pass it up.