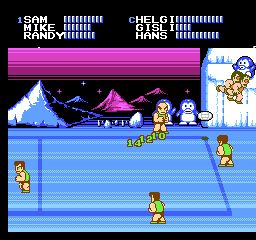 This is going to sound strange but growing up my elementary school never played dodge ball.  I can’t count the number of TV shows and cartoons that portrayed this physical activity as an essential institution of youth yet I was never able to partake in this slice of Americana.  Now that I think about it I never played dodge ball in school, ever.  Luckily I had games like Super Dodge Ball to sate my interest in the sport.

Super Dodge Ball was released by American Technos in 1988.  Kunio Kun and company are on a worldwide tour to become the best Dodge ball team in the world.  For some reason that premise just seems so goofy.  A team of youths going around the world to smack every race in the world with balls is hilarious when you think about it.  Originally released in the arcade the NES port featured many enhancements over its big brother making it a much better game.

Dividing into 2 halves each team has 3 members on each side for offense and defense.  The objective is simple: wail on your opponents as hard as possible to win the match.  The rules of Dodge ball are in full effect: balls can be caught or passed between team members to try and nail unsuspecting opponents.  You can also pass to your defensive members on the other side for cheap shots although the computer can do the same.  The back and forth of a typical match is exactly what you would expect, so what makes Super Dodge Ball special?  The characters and their special moves.

One of the additions to the NES port was full character stats for each player as well as giving each their own special move.  Prior to a match you can arrange your characters on the court, taking into account their abilities and what kind of turf you’ll be playing on.  The over the top special moves are the games highlight, creating such implausible scenarios as a ball splitting into 3 or becoming a homing attack.  These moves are brutal and the results they produce are hilarious.  Launching a throw that practically turns into a missile and plows through defenders never gets old.  It’s fun to experiment and see what everyone can do to create your dream lineup.

Another factor that comes into play is the turf: as you visit rival countries the turf changes and affects player movement differently, which also has an effect on how you launch specials.  There’s actually a surprising amount of depth to the game that doesn’t come across on the face of it.

Drawn in the trademark Technos style anyone familiar with their games will be instantly recognize their trademark sprite design.  For those who are not you can expect short but squat characters that still manage to exhibit tons of personality.  The animations to accompany every action are many and varied; it’s hilarious to see players rise to heaven when defeated or fly across both sides of the screen when they’ve taken a nasty hit.  It’s like an athletically challenged geek’s nightmares come to life.

Also kudos to Technos for going the extra mile and giving each country its own unique background; it would have been very easy to stage everything in a generic gym.  The one weak spot in the overall presentation would be the flicker and slowdown.  At times the chaos is too much for the poor NES to handle, leading to disappearing sprites and choppy movement.  It isn’t something you can’t account for but still annoying.

Simple on the surface but deeper than you would expect Super Dodge Ball is the total package and equally fun in single or multiplayer.  Technos took what could have been a droll concept and turned it into more raucous fun than you can imagine.