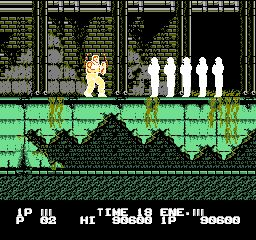 It’s funny how our minds work.  Nostalgia can cloud our memories and we’ll remember something fondly when in actuality we never liked it to begin with.  In this particular instance I recall fond recollections of playing Bad Dudes in coop mode and loving every second of it.  The reality is anything but nice.

Bad Dudes was released for the NES in 1989.  A port of the arcade game Bad Dudes vs. Dragon Ninja for the most part the NES version retains much of what made its forefather iconic, including the hilarious localization.  “The President has been kidnapped by Ninjas.  Are you a bad enough dude to rescue the President?”  Yes that is the extent of the plot.  This game bleeds the 80s, from the corny action movie plot to the presidential references.  Even the heroes catchphrase “I’m Bad!” is likely a reference to the Michael Jackson song of the same name.  The cheesiness is largely why the game is remembered but how does it hold up as a side scrolling beat em up?

As either Blade or Striker you’ll be fighting an endless assortment of ninjas on your way to save the president.  Seriously aside from dogs it’s all ninjas.  Like the Double Dragon games you have an assortment of moves such as punches, kicks, spin kicks, etc.  Unlike those games the moves are relatively easy to perform.  The most useful of these is the charge punch which blows through groups of enemies simultaneously and is quick enough to use in any situation.  The only weapons available are a sai or nunchakus, with health restoring cans of coca cola rare.  The fundamentals are there but the execution is shoddy.

Bad Dudes is riddled with issues.  The collision detection is off and trust me it’s incredibly frustrating to see your punches and kicks largely ignored.  This is a major issue as the enemies swarm you in groups of 2-4 at once.  The game is riddled with innumerable cheap hits that you cannot avoid.  In the arcade version most enemies died after one hit; here they can take multiple blows and more than likely will get a few cheap hits before you kill them or worse, leave you open for the multitudes of ninjas undoubtedly coming up behind you.  The bosses with 2 exceptions will drain your lives and to add insult, the game throws in a fucking boss rush before the last boss.

With limited continues and no extra lives unless you complete a level most will never see the end the legitimate way.  If you thought the Konami code was overkill with 30 lives you can cheat and get 63 lives with a simple code.  Yeah, you read that correctly.  I cheated to beat the game back in the late 80’s and if you want to see the end you’ll do the same.

W e all remember this game for its laughable 80s nostalgic touches.  Unfortunately it is not a good game.  At least the NES version, I never had the opportunity to sample the arcade game.  I wish I could say it lives up to the near meme status it has achieved but sadly it doesn’t. There are far better beat em ups out there, play those instead.