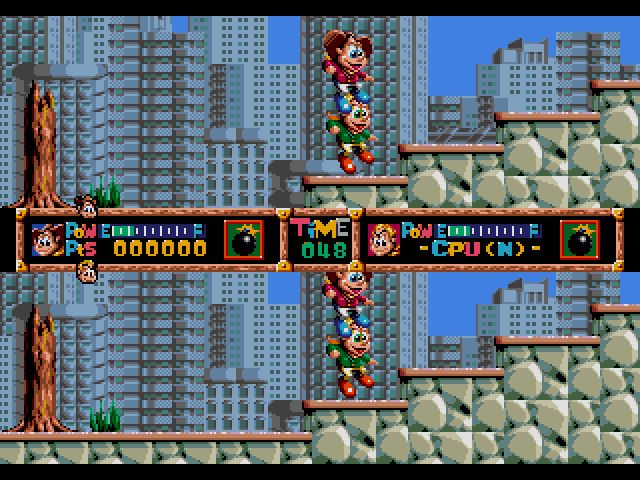 Next to Joe & Mac I would say Will & Rick (or Johnny & Tom) from Dashin Desperadoes/Spinmaster are the closest Data East came to having a mascot. Although they only starred in two games I could easily have seen them star in more, especially if they were of the same quality present here. Despite some frustratingly perfect AI Dashin Desperadoes is an interesting game unlike most in the system’s library that is better with a friend.

There is no story in the game other than the basic premise of Will and Rick fighting for the affection of love interest Jenny. It’s a bit silly the lengths the two go for the love of one girl as they toss all manner of bombs, ice, and electricity at each other to get the girl. I don’t care if she has the best personality in the world, something is wrong with Jenny. Rick straight up kidnaps her every third act out of frustration and yet she still turns around and promotes the competition between the two. But I digress.

Dashin Desperadoes could be viewed as a spinoff to Data East’s arcade game Spinmaster as it stars the same characters under different names. To some extent I do wish they would have ported Spinmaster as the game is awesome and only rich kids had a Neo Geo but I’ll take this instead. Rather than a normal action platformer like its arcade big brother this is essentially a foot race between the 2-players or the AI. The object is to reach the girl before your competition by any means which sounds simple but is anything but.

Using the same split screen view as Super Mario Kart and Sonic 2’s multiplayer mode you can keep an eye on your opponent to see how far ahead they are or if they are closing in. There are a number of obstacles in your path that can help or hinder you such as random animals, springs, and even volatile terrain. There are a nice complement of weapons to bludgeon your rival with, most of them designed to stun or otherwise deter for a few seconds. Fire, ice, you can even roll into a ball and trip them up! Every third act in each zone is a boss battle in which Rick decides to just kidnap Jenny and you must destroy his escape vehicle before he gets away.

The split screen view has its uses but in my opinion it’s detrimental to the game. In the beginning when the level design is a bit simpler it’s easy to ignore it and focus on the little bits of platforming and such. But in the later stages of the game things become more complex and the narrow field of view becomes a drawback. You really do need to see far enough ahead to line up your jumps or even to avoid the simple mechanisms designed to trip you up. As a result you have to memorize the level layouts to even stand a chance in hell of even keeping pace with the AI for a few seconds.

The early levels ease you into it a bit as the main path is pretty much a straight line or you can take the high road full of power-ups. There’s a flow to the way everything is lined up that makes your movements seem poetic if you time it right. But all that disappears about midway through. Once the level design becomes more complex you can’t move as fast and you absolutely need to always stay in motion to beat the computer. There are way too many obstacles and traps to contend with, an issue the AI doesn’t have to deal with.

As a result this is an incredibly difficult game because the computer is a bit too perfect. It makes a few mistakes here and there, mostly when you get lucky and hit it with a bomb and it stumbles into a trap. But otherwise the AI will more or less perfectly navigate every ledge and platform at a speed you can’t keep up with. I dare say there might be some rubberband AI at play since the computer can overtake you no matter how far ahead you get. It seems like Data East recognized this to an extent and if they get too far ahead it will wait, not that it makes much of a difference. There are passwords and limited continues which do help somewhat but prepare to replay the same levels repeatedly in frustration.

Conversely this is a much better multiplayer game. I put this in the same category as Bomberman; the single player mode is competent but it is clear this was built with multiplayer in mind. The competitive stages are drawn from the same six stages of the campaign but there layouts are different. With an actual human behind the controls the playing field is level and it comes down to skill. There are some interesting variations on the standard race formula ad the game keeps track of stats and such. The same rubberbanding from the single player is present in the form of item drops to help you catch up but these can be ignored. I didn’t expect much from the multiplayer to be honest but it was a nice surprise when I rented the game back in the day.

This is a much stronger title with multiple players rather than dealing with the frustrating computer. It sucks as there is a lot to like such as the great graphics and good level design for the most part. I still think it’s worth it but you have been warned.