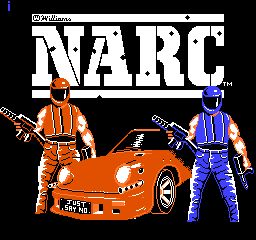 I remember NARC as that ridiculously violent video game about drugs. After seeing a brief clip of it in the Ninja Turtles movie I wanted to play it badly because it looked really cool. The anti-drug message was lost on me as I didn’t care, I just wanted to shoot guys in the face with rockets and make them explode. The arcade game lived up to my expectations but the NES port was a huge disappointment. NARC deserved better.

NARC was released at the height of the War on Drugs, a period where every piece of media was urging kids to say no to drugs. Even the cartoons took the time out of their 30 minute fuckery to air special episodes designed to show kids the dangers of drug use. If I hadn’t grown up in a shit neighborhood I’d think all drug dealers dressed like the villain of the week on Miami Vice. Some of that stuff was downright scary man, I mean they straight up killed a kid on Bravestarr, how hardcore was that? NARC was similarly over the top in its messaging but in this case it was awesome, with great graphics, tons of gore for no apparent reason, and good controls.

At least in the arcade. The NES port by Rare went horribly wrong somewhere during production and is a terrible game all around. Between the awful visuals, screwed up controls and borderline insane difficulty nearly all of the charm of Midways’ arcade classic has been lost.

The absolute worst offender is definitely the controls. In the arcade Narc used a four button setup with a button dedicated to firing, jumping, crouching, and rockets. With only two buttons Rare had to be creative to adapt that setup but in my opinion they went about it in the worst way possible. Holding down B will fire your machine gun but to let off rockets you have to tap the button. Trust me, it almost never works consistently. The crouching and jumping controls work similarly; holding A will let you crouch while tapping it will jump. It’s even more frustrating in this instance but to the game’s credit you almost never have to jump and crouching is relegated to fending off dogs.

The world that NARC takes place in is one huge warzone where drug dealers and junkies engage in shootouts with the cops around the clock. Killed enemies drop bags of drugs that will grant point bonuses at the end of every level. Aside from that busting perps, by standing next to them for a second or two, is also a good source of points for extra lives. You really don’t want to bother with that option as it will just result in you dying amidst a hail of gunfire. Each level basically consists of moving from point A to B, entering a room and killing random criminals until a key drops and moving on to the next stage. It sounds simple but as with all bad games it is anything but.

Between the jacked up controls and the game’s relentless pace you’ll be hard pressed to move a few feet without dying in seconds. Enemies spawn infinitely and will never stop chasing you. While you do need the points to build up a stock of extra lives it is actually better to simply run for the exit immediately. The second part of each level is a brutal gauntlet where you’ll simply move back and forth in one long corridor killing anything that moves until someone finally drops the necessary key. The problem is this could take seconds or upwards of ten minutes if you are unlucky. You won’t last that long anyway because of the crushing difficulty.

With no life restoring items your extra lives are sapped quickly as syringes drain health in chunks, hard to kill gods pursue you and bodybuilders stick to you like glue. Pray you don’t run out of ammo (which happens frequently) since you’ll have to deal with one bullet every 3 seconds and hope a thug will drop more. If you have the stomach to stick with the game up until its conclusion the final boss battle is right up there with the Jacquio in terms of frustration as the hit detection on Big Boss is absolutely terrible. God I could go on for days but I think you get the picture.

Considering Nintendo’s stringent content guidelines in the eighties and nineties it’s an absolute miracle that NARC was released almost completely intact. All of the drugs are still here which makes sense as it would defeat the purpose of the game. Hitting enemies with rockets will cause them to explode in a shower of body parts, which I’m not sure how Akklaim got past the big N. It’s definitely toned down from the arcade which was a bloody spectacle. One curiosity is that you can’t kill animals; they merely shrink and run away when shot. Someone’s priorities were a bit screwed up here.

There’s no sugar coating it; this is a hideous game. Midway did a bang up on the arcade game as it hosted some pretty revolutionary visuals and technology for its time. You’ll find no evidence of that here as the developers did a piss poor job trying to replicate that look. The backgrounds are heavily repeated and feature color choices so ugly I refuse to believe an actual human being okayed it. A large number of enemies were cut from the game so you’ll end up facing the same two or three drug addicts and pushers hundreds of times per level. And the creepy final boss that was one of most impressive things my nine year old eyes had ever seen? Let’s not go there. This had to have been created under a strict deadline or by the D-team at Rare as they did better work than this.

In every possible way this version of NARC is a huge disappointment. Both the developer and publisher are capable of far better than this which makes the fact that they released this turd all the more disappointing.