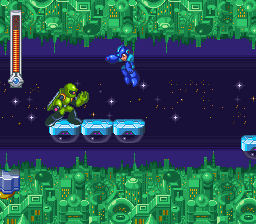 Up until recently a large number of current generation games were still seeing a release on prior platforms, one to leverage the large install base of the Xbox 360 and PlayStation 3 but also because not many had moved on to the newer platforms. This phenomena is not unprecedented however as Capcom began work on a SNES version of Mega Man 8 for the same reasons. However it eventually became an original title and one of the few games in the series to remain in Japan until years later. With plenty of new features and much tighter gameplay than Mega Man 7 Rockman & Forte was an excellent swan song for the series on the SNES.

A year has passed since Mega Man defeated Dr. Wily at the end of Mega Man 8. The peace his victory achieved is interrupted when a new robot named King steals data from the Robot museum to create an army to rule the world. Mega Man is not the only one after King however as his rival Bass decides to destroy him in a bid to prove he is the most powerful robot of all.

You have a choice between Mega Man and Bass this time around and the two have wildly divergent abilities. The Blue Bomber remains unchanged from prior installments meaning the charge shot and slide make their return. Sadly this time around there is no Rush outside of an optional upgrade you can buy. Playing as Bass is a breath of fresh air as he has a number of powers Mega Man can’t compete with. Though he lacks a charge shot Bass can fire in seven directions. He can also dash and double jump.

The game seems heavily in favor of Bass as his double jump in particular sees plenty of use. Once you make it to King/Dr. Wily’s castle you won’t have to futz around with the special weapons to reach certain ladders or clear spiked pits as his dash jump is more than adequate. However he has enough weaknesses that offset his advantages. Bass takes more damage from hits; this is already a pretty tough game and the extra damage means bosses will tear him apart in seconds. He also can’t move and shoot and has a weaker mega buster. Essentially the choice comes down to easier levels (Bass) or easier bosses (Mega Man).

The structure of the game is different this time as all eight robot masters are not available from the start. After the intro stage you only have access to Cold Man, Astro Man, and Dynamo Man with more bosses opening up in pairs of two after each is defeated. It cuts down one of the best elements of the series, figuring out the best order to beat the bosses. It also means you’ll be stuck using the default mega buster to defeat a few of these bad asses since your options are so limited.

It’s an additional layer of challenge the game definitely didn’t need as it is hard enough as is. This is possibly the most difficult game in the series. As I mentioned before the level design leans heavily in Bass’s favor with Mega Man having a much more difficult road to each boss. There are more puzzle elements to certain stages that require a bit of trial and error that keep the levels from being a stale left to right affair as well as interactive background elements that require certain powers. Even if you have the weapon that a boss is weak against it still comes down to execution. Dynamo Man is weak against the Copy Vision yet the only advantage that gives you is that his attacks will focus on your clone. You still have to do all the work. Burner Man is incredibly mobile and you have to force the ice to push him into the spikes to do damage.

The item shop from Mega Man 7 makes a return and can slightly tip the odds in your favor. There are a large range of items and abilities to purchase with bolts such as extra lives, and character specific powers. These are awesome, such as an auto charging mega buster, super armor, or even regaining health when standing still. Also nestled throughout the entire game are 100 data CDs that offer profiles of all the robot masters and characters throughout the series. Some of the discs are cleverly hidden and will require the Rush search while a healthy number can only be collected by a particular character. The shop in addition to the data CDs is a huge incentive to replay past levels and go through the game twice, something the series has struggled with in the past.

Although it was released after Mega Man 8 Rockman & Forte does an excellent job of mimicking that game’s graphical style despite being produced on weaker hardware. In fact many of the game’s sprites and background elements were lifted wholesale from that game which makes sense considering this started as a port of that game. Mega Man isn’t as large as he was in part 7 making precision jumps and such easier. The animation has seen a significant upgrade, especially the bosses. Tagging them with their weakness produces special animations, with some absolutely hilarious. Push Burner Man into the spikes and he comes flying out holding his bottom! The music is generally excellent as in all installments of the series although the lack of any voice acting as in part 8 is missed. Or maybe it’s better that way considering how it turned out in that game.

Rockman & Forte adds just enough to the series familiar formula to feel fresh and is an all-around excellent game. This is the game Mega Man 7 should have been but that is neither here nor there. The SNES game was fan translated years ago however the game was ported to the Gameboy Advance in 2003 and released in the US as Mega Man & Bass, either is a viable option for those wanting to experience one of the better games in the series.