Disney’s Adventures In the Magic Kingdom NES Game Cartridge
Disney’s Adventurs in the Magic Kingdom was released in 1990 for the NES and was published and developed by Capcom. Yoko Shimomura composed the soundtrack, later making the scores for Kingdom Hearts. Five regions received the release of the game, being the United Kingdom, France, Australia, Scandinavia, and the United States. Three different covers were used on the box. You start with a character with no name, and Goofy ends up leaving the gold key inside the castle. Mickey Mouse comes to ask for your help to locate six of the silver keys that will open up Cinderella’s Castle gate to let the parade begin. When completing the mission, you are congratulated by Mickey and the parade starts. The art on the front cover depicts Magic Kingdom from Disney World, but the attractions in the game shows more of the Disneyland layout in California.
There are five stages for the player to finish, which are modeled like the rides in theme parks from Disney, including a trivia test to get the keys. The player walks around the theme park and chooses what stage to attempt. Two of the levels are vehicle stages from a top down view. One is the Autopia attraction, which is a game where the player drives to dodge obstacles &nbsp;while racing Panhandle Pete. The other is the Big Thunder Mountain attraction, where the player is controlling a train to dodge obstacles while trying to choose the correct path.&nbsp;
Two more stages are platformer type. One is the Haunted Mansion, and the player will need to defeat ghosts with candles and get a key. The other is Pirates of the Caribbean, where the player will need to save six villagers that pirates kidnapped after raiding an island. The fifth level, Space Mountain, is in first person, and the player gets on a spaceship to ride to a specific star. You will try to maneuver through asteroids and shoot the enemy spaceships with your phaser. The trivia can be played any time, since the player will need to talk to children, who will then ask you questions about Disney related characters and movies. The last silver key will be revealed once all the questions are answered right.
UPC: 0-13388-11018-6
Platform: NES
Players: 1
Condition: Used
Genre: Action and Adventure
Region: NTSC (North America)
Rating: Everyone 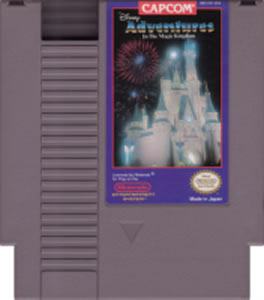 You're viewing: Disney’s Adventures In the Magic Kingdom NES $19.99
Add to cart