Iron Tank NES Game Cartridge
Iron Tank: The Invasion of Normandy was released in 1988 for the NES and was produced and developed by SNK. The arcade game TNK III, also known to Japan as TANK, is what Iron Tank is based on. The game is sometimes considered a successor to Guerilla War, an earlier SNK game, due to the similarities of gameplay, layout, and graphics.
The setting is during the Normandy invasion, with the player taking control of Paul, a commando codenamed SNAKE. Paul mans the Iron Tank to get into the German fortress. It begins with the tank being landed on a beachside. The player then goes forward and fights enemies including soldiers, officers, fixed guns, and a variety of tanks. Captured soldiers will give you intel if you take the opportunity to save them. You will then have to move around other enemies and obstacles like armored trains, gunboats, submarines, land mines, electric fences, etc. On the NES controller, the A button will fire the machine gun, the B button will fire the main gun, the Start button will pause the game, and Select button will open the game menu. The tank’s turret can shoot in all eight directions and can be rotated by pressing A at the same time and the direction you want. The turret maintains its direction while moving on screen no matter of the other movements of the tank. This can be used as a game strategy.
During the in-game menu, the player can turn on or turn off fire options for the main gun, read the radio messages received, check map progress, and turn the automatic Refuel option on. There are a total of four options for the main gun. Rapid Fire, V, will increase the firing rate, allowing the player to hold down A. Armor Piece, F, will let shots go through walls and other terrains, also doubling the shot damage. Bomb Shells, B, have the shots explode after hitting or when the shot reaches its max range, and this will also double the shot damage. The final option Long Range, L, doubles the shot range, practically going the entire distance on the screen.
The game has multiple levels, each having a boss in the end. Levels are also continuous, as in when a boss is defeated, another level is started instantly. A unique part of this game is having the ability to choose a different path of your choice to the last level. Paths will vary, with some having less levels to make the game shorter, but they are more difficult. The same goes with more having more levels making the game longer, but are less difficult. Since the paths will break and then converge at certain points, the player can mix the paths while progressing. The bosses of each level will vary in weaponry, including large tanks, fortresses, grounded aircraft, and railway artillery. Most will have some movement in one of two directions like the railway gun, and the tanks can freely move around. They all have movement patterns that are predictable, which can be used to the players advantage to destroy them.
UPC:0-18484-16500-9
Platform: NES
Players: 1
Condition: Used
Genre: Shooter
Region: NTSC (North America)
Rating: Everyone 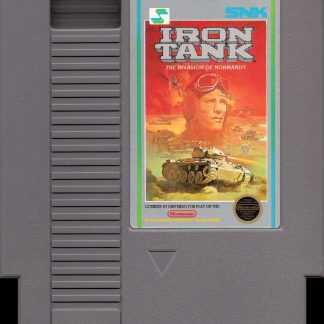