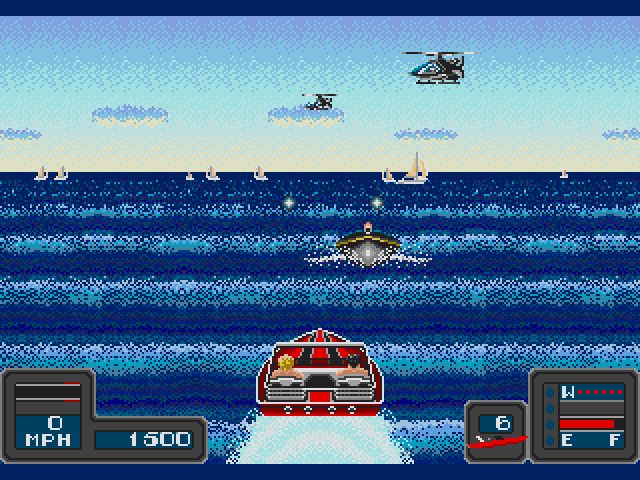 Yikes, this game. I came into contact with Bimini Run when I made an unfortunate trade with someone at school. I won’t mention the game I traded away but let’s just say the other guy made out like a bandit. Bimini Run looks really cool on the box art but in reality is one of the most frustrating games I’ve ever dealt with. When you are young and new games are scarce you have no choice but to put as much time as possible into the games you have, terrible or not. I spent $50 for X-Men NES (it hurts my soul to this day) and you better believe I got my money’s worth out of it. But like that game I found no satisfaction in playing Bimini Run and came away from it with the sense that I had wasted my time.

The story is certainly something else. You are Kenji O’Hara, expert motorboat driver and secret agent. Your sister Kim is kidnapped by the evil Dr. Orca and it is up to you to brave the helicopter pilots and boat drivers hired by Orca to protect his lab in order to save the girl. Secret agent turned motorboat driver ranks up there with Keanu Reeves’ turn as an undercover surfer in Point Break in terms of cheese but I’ll let it slide. I like the idea behind Bimini Run but its execution is sorely lacking. This could have been a pretty cool and unique game with some semblance of balance.

Bimini Run is a hybrid action shooter with your boat sporting an array of weapons. There’s a machine gun for close range targets that can also be aimed high to deal with airborne targets using a separate button. As if that weren’t enough the boat is equipped with a bazooka to destroy radio towers and larger bases. Kenji is in constant radio contact with headquarters as they will alert him to updates in mission status; get used to hearing “Kenji, come in!” every few minutes. And yes it is just as annoying as it sounds. The controls are precise and snappy; good thing too because you’ll need them.

Each mission will give you a specific task such as catching a specific target, destroying a certain number of radio towers or even tailing someone to their base. There is a bit of an open world structure as some missions allow you the freedom to travel anywhere on the large maps, fuel permitting. While it starts out varied the missions do start to repeat in the second half. I have to mention that while this starts off as a simple rescue mission as you deal with speedboats and choppers it does begin to get weird towards the end as you fight mutated sea creatures and follow mermaids. Bet you didn’t expect that last bit. That’s not to say it is bad; it just comes out of left field. Unfortunately however what is bad is the over the top difficulty.

Any enjoyment that could have been found within the game is completely ruined once you realize how viciously difficult Bimini Run truly is. It’s no exaggeration when I say this is one of the most aggravating games I have ever played, up there with Battletoads. One hit equals death and seemingly everything can kill you. The enemy boats and helicopters possess a level of accuracy with their shots that you’ve probably never seen before; I wager the majority of your time spent with the game will be dying every few seconds. It’s really that bad. And I’m only referring to the first few missions! It gets even worse in the second half of the game! By the fourth mission every ship you come in contact with will let off a spray of bullets you have no hope of dodging. You can slightly fudge it by moving them off screen but it doesn’t always work. The late missions really start to drag on far too long, almost as if they are daring you to simply give up. Considering the weak ending I was probably better off.

Maybe the reason it makes me so angry isn’t just because it’s ridiculous but because it completely ruins what is otherwise a fairly unique game for the time. The open world structure of the missions is different from most games at the time and who wouldn’t want to explore the open seas in a tricked out speedboat? Granted there’s nothing out there except numerous identical islands and an endless sea of enemies but it’s the thought that counts. If the game had a simple life bar or were actually balanced at all this would have been incredibly fun.

Perhaps the difficulty is so high because the game is so short. At six missions you could complete the game in fifteen minutes or so if there were any semblance of balance. But you are not going to because there is no reason to bother tracking down this game as any of its good points are ruined by shoddy execution. Cobra Triangle this is not.