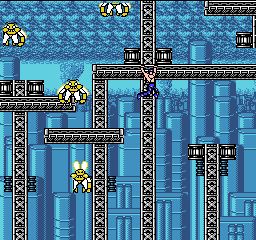 It’s interesting just how many unlicensed and bootleg variants of Contra are out there. There are enough for it to be its own subgenre at this point. I can see why: even though it was released early in the system’s lifespan Contra remains one of the NES’s best action games. Hell it is one of the few games that I actually enjoy playing in coop. While many of these unlicensed games are terrible Contra Spirits is actually pretty good for what it is and manages to capture a lot of what made the SNES game a classic. There are some pretty glaring flaws but I’d certainly rather play this than Contra Force.

You can forget about the extensive weapon list of the original as that is the first element that had to be cut back. Here you only have access to the spread gun and the laser. This is a huge blow and a step back from even the first Contra. In terms of their functionality the laser is the same but the spread gun has been neutered. Its radius is smaller at 3 waves of bullets rather than five. The rate of fire has been reduced and is inconsistent; sometimes you can fire a consistent wave of shots and others there is a slight delay. It’s still far and away the better choice but lost what made it so special. Contra veterans know that satisfying sound when you get up close and every individual bullet hits a target all at once. That has been lost. You can only hold one weapon at a time and the bombs are still present but are reduced in power.

Even with the reduction in power-ups the game is still playable. I’m actually surprised just how much they were able to keep from the original. Of the six levels only the fifth stage from the original has been cut and the level order has been rearranged. The third level is now the second and stage four’s motorbike sequence is now the third. The overhead view of stage 2 is the game’s midpoint and the final level is still the same. Jumping from missile to missile, the weird turtle beehive creature, even the rematch against Red Falcon’s new form from Super C is present. A few of the minibosses have been excised which does kind of give this version of the game a greatest hits feel to it.

For all of the praise that I’ve delivered you can clearly see where they cut corners. Levels 2 and five are identical aside from a mere palette swap and one new enemy. Obviously the heavily Mode 7 based overhead stages needed to be changed but from a technical standpoint they fare better than the rest of the game. You just can’t rotate the camera willy nilly. While it looks the same the layout has been so simplified you can simply run through it. The final level is severely cut short and gets right to the point as it tosses you into the final boss battles within seconds. Some criticized the original for being short but I think it was the perfect length. I can’t say the same here although the difficulty makes up for it.

The Alien Wars was noted for putting up a fight even on normal difficulty and this features the same it not greater level of challenge. However that comes from a few unfortunate factors. Some levels feature no weapon drops at all and it is painful to try to soldier on with the standard machine gun. Bosses take way too many hits to kill, to the point where I started to wonder if the game were broken. But possibly the biggest crime is the fact that you get no extra lives and there are no continues. Depending on the version of the game you can set your starting lives to 9 or 30 but that’s it. Don’t expect the satisfying ending you got for completing the game on hard either; what you get is actually pretty hilarious instead (for the wrong reasons).

This remains incredibly faithful to the source material in terms of presentation. Obviously the Mode 7 effects are gone but you’ll hardly miss them. The backgrounds sport an incredibly high level of detail and a layer or two of scrolling. The enemies have been redesigned to fit within the NES limits and sadly barely resemble their counterparts. Nearly all of the boss battles are in, even the crazy creature at the end of Area 3 that rips through the wall in gripping fashion. It loses its visual impact but they at least tried. It isn’t completely positive though. The game suffers from heavy sprite flickering and the reduced color palette is pretty ugly in spots. Worst of all is the music; they’ve made some pathetic attempts to replicate the classic soundtrack of the Alien Wars but the music is so soft and subdued it might as well not exist.

Considering how drastically different most 8-bit versions of 16-bit games are Contra Spirits turned out surprisingly well. While it mimics the look though the “feel” is off. The many tiny details it gets wrong demonstrate why Konami were so beloved in that era. I give them a C for their effort.