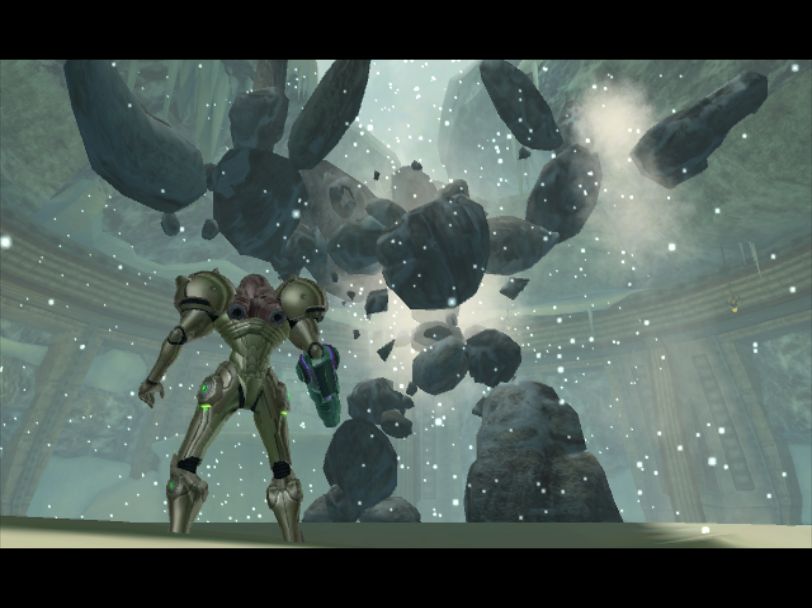 Metroid Prime should not have worked. When the game was first announced to use the first person perspective it would be an understatement to say that many expected the worst. It also didn’t help that its developer, Retro Studios, had undergone turmoil within the company leading to Nintendo having to step in and create order from the chaos. The series was known for its tight focus on platforming in desolate environments and to that point the first person shooters that tried (Turok) were dreadful. When the game was first demoed at E3 2002 it seemed as though everyone’s fears would come to fruition as the game was a janky mess.

But then a strange thing happened. In the time until its release that November the game came together in a way that is truly rare in this industry. What many failed to realize is that the pieces were there, they just weren’t assembled into a cohesive whole by the time of E3. Not only would Retro Studios create one of the definitive first person action games of its time but they would also establish themselves as a top tier developer. Metroid Prime brought the series back in style after its eight year hiatus and is nearly as great as Super Metroid. That’s high praise and I mean it.

Taking place between the original and the Return of Samus the story sees Samus intercepting a distress signal from a space pirate frigate under. The frigate is destroyed by her arch nemesis Ridley and it crash lands on the planet Tallon IV with Samus in hot pursuit. You could almost look at this as a prequel despite its place within the timeline considering how backstory the game gives about the Metroid universe itself and that’s part of why I like it so much.

Uncharacteristically for the series Metroid Prime is pretty story heavy. To many this would be a detriment as the series prides itself on its sense of isolation and silent storytelling. However just how much you would like to delve into the deeper plot is completely left in your hands. Using the new scan visor nearly everything in the environment can be scanned to provide background information. Every enemy and object is illuminated with history and data that can even reveal weaknesses. There are extensive space pirate logs that detail their behind the scenes machinations such as their attempts to mine the planet and also keeping track of your progress. Personally my favorite are the Chozo Lore carvings that reveal much of the history of the universe and even Samus herself. Aside from scanning specific background elements to activate elevators and open doors you don’t need to engage with any of this which satisfies both the camps that like being left to their own devices and those that like story.

The one thing that needs to be clear: this is not a first person shooter. Despite its viewpoint this is not intended to be twitch based action game nor should it be. Combat is merely a means to an end with adventure being the prime (heh) focus. The controls are adequate to the task but not to the standard of regular first person action games. The majority of the time you’ll simply lock on to a target and blast away and strafe if need be. Free look and aiming is only available by holding the shoulder button although you won’t need it much. I know dual analog is the default setup for first person games but I can’t stress enough that it isn’t necessary here.

That being said however the action does pick up once the space pirates themselves begin to appear more frequently. The indigenous lifeforms of Tallon IV possess their own quirks but very few are aggressive and dangerous as the pirates in all their forms. Aside from possessing at times variations of your own weapons they can inflict the necessary damage to pose a threat. But these pale in comparison to the many fantastic bosses spread across the planet. These battles are multi-stage affairs that will call on all of your current capabilities to win and become more elaborate the deeper you progress. These boss fights rank as some of the best in the series history.

With a functional combat system the focus is squarely on exploration and it is here that the game truly excels. The majority of the upgrades introduced in Super Metroid have brought over and work extremely well. The various beam weapons can be switched around using the C-stick, a feature the game calls on frequently. The morph ball is the only time the game will switch to a third person view which is a smart decision.

Possibly the greatest addition to the game are the various visors. Aside from the scan visor you start with throughout the course of the game you’ll receive two additional visors that change your perception of the world. Aside from looking visually their uses in game are completely original. The thermal visor can track heat sources and enable navigation within dark environments. The X-Ray visor can see through objects as well as track invisible enemies. I can’t stress enough how cool they effects are and the way they are integrated into the game is genius.

The way all of the various suit upgrades are integrated into the game goes hand in hand with the expert class world design. Every individual room is specifically named which makes navigation easier. But the true star has to be the 3d map. Traversal around the huge world of Tallon IV is made easier by an increasing number of elevators and shortcuts that become available with every suit upgrade. There is some guidance provided as the game will note one or more locations that you should visit but leaves actually reaching that spot in your hands. Plus it can be turned off if you are that much of a purist. There are environment based puzzles everywhere that make use of one or more of your suit upgrades to figure something out. There are enough subtle hints to guide you with your every action being constantly rewarded. Missile and energy tank upgrades are hidden within the environments extremely and using the various visors in even the smallest rooms will usually yield something. Honestly I’m running out of words to praise the game with as it just screams of a top tier production in every facet.

Speaking of which, wow. The art direction in Metroid Prime is some of the greatest I’ve seen in any title even to this day. Every single room has been individually crafted with no repetition of assets outside of shared look to each zone. The individual cracks, crevices, and distant details were all modeled rather than using fancy tech to simulate the effect which makes that ridiculous attention to detail even more insane. The various areas that make up Tallon IV are distinct and diverse and sport brilliant architectural design. The snowy peaks of Phendrana Drifts are in stark contrast to the desolate Phazon Mines or the plant like overgrowth of the Chozo Ruins. The special effects used for the visors are still so incredibly cool that I wonder why no game since has copied them; the X-ray visor in particular is just incredible. All of this visual splendor is running at a perfect 60 fps that never, ever drops. These guys are god damn magicians.

That isn’t to say the game is perfect. Looking back at it now some of the low polygon environments definitely stand out. Some of the texture work is garish up close but then again that applied to most games during that period. While it may seem like there are no load times the game cleverly masks it but will occasionally break. Doors will open a little bit slower than normal or won’t allow you to pass for a few seconds despite giving you a clear view of the next room. But if this is the tradeoff for everything else I’ll gladly take it.

The soundtrack by series composer Kenji Yamamoto is just as moody as Super Metroid and I would say even more diverse. The range of instruments is greater with guitar hooks, piano, and other synthesized instruments contributing to the oppressive mood. The sound is also dynamic; when you enter a room you’ll instantly know if there are space pirates present as the music becomes frantic and you’ll hear their guttural howls. Add in a large number of environmental sounds and you have an audio package that is almost as good as the graphics.

There’s nothing more that I can say that the mountain of game of the year and best game ever awards haven’t. Metroid Prime is currently one of the highest rated video games of all time and with good reason. All of its constituent parts come together to create one of the most memorable journeys I have ever embarked on. This is not just one of the GameCube’s best titles but also one of the best video games ever made. Classic.