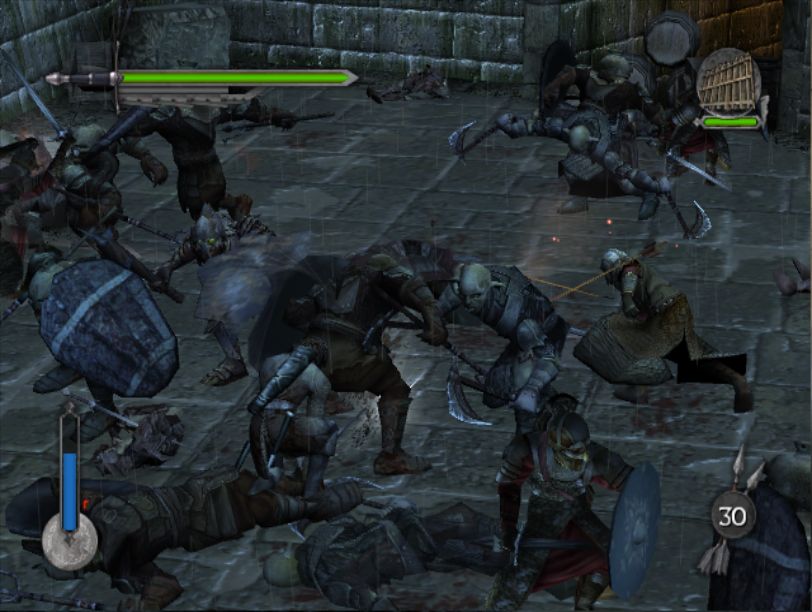 When you think of the Lord of the Rings you think of an epic adventure. I certainly wouldn’t begrudge anyone from assuming that the games that would accompany the three Peter Jackson movies would probably be action RPGs but kudos to Electronic Arts for defying expectations and creating some of the best beat em ups released in years. From the nuanced combat to its slavish devotion to the source material I wish more licensed games were built with this much attention to detail. It’s a bit ugly now but this will still provide hours of entertainment.

Although the game is named the Two Towers it follows the plot of the first two films, albeit in a condensed form. Most of the key points of the two movies are touched upon and serve as excellent source material for the levels. It should be noted that EA only had the license for the films (Vivendi had the book license) and as such were limited in what they could use. While I can appreciate them using clips from the movie as framing devices it does come across disjointed as a whole. But let’s be honest, you’re not here for the plot.

Aside from the brief introduction in which you control Isildur the primary heroes are Aragorn, Gimli, and Legolas. While it is slightly disappointing that the other members of the Fellowship aren’t playable they do fight by your side in most of the levels. And besides, the trio are so fully fleshed out ability wise that the game would have seemed bloated anyway. The differences between the characters are significant and unfortunately Aragorn is too well rounded. Legolas is best with a bow as he attacks faster and is equipped with 60 arrows to start. However he is physically weak and will die in a few well-placed hits. Gimli is physically the strongest but outside of maybe one level is too slow to warrant constant use.

To start with you are armed with a fast attack, a heavy attack to break shields, and a few defensive moves to parry attacks or shove enemies out of the way. Each character can also perform a ranged attack of varying speed and strength. Knowing which attack to use when surrounded or when dealing with heavily armored attackers is key to keeping your combo strings going as you are graded on your performance. Like Devil May Cry your combos are awarded ranks with the best being perfect, which allows one hit kills for a brief time. Chaining attacks together without being hit is the fastest route to perfect status which not only helps clear the screen but awards the most points at the end to buy upgrades. Defense is also absolutely critical as a result; while the screen is never as crowded as in Dynasty Warriors it does get pretty busy. The smaller crowds do avoid the repetition inherit in those games as well.

The Two Towers avoids the flaw of a limited move set inherit in most brawlers by offering a substantial upgrade system after each level. There are a variety of techniques to learn, some requiring pretty complex button combinations and while you can pull up the menu at any time it isn’t necessary. One technique in particular, Isildur’s Swift Terror and its upgraded counterpart are so overpowered you don’t need to bother with anything else. That’s just my opinion of course but the depth is more than welcome in allowing some leeway in terms of how you want to play the game.

Over the course of the twelve missions the difficulty has a relatively nice curve. The initial few are easy and almost impossible to fail but once you reach Fanhorn Forest there is a sharp increase. The level structure is constantly shifting as well. Most levels follow a linear path but usually have a set objective to break from the monotony of killing the same goblins and Uruk-hai over and over. Some will task you with killing a set number of enemies, or even something as short as beating a few dire wargs and their leader. Only the last few stages drag on far too long but that is a small complaint.

There are a host of extras included as incentive to go back and replay stages to earn a better ranking. There are numerous interview with members of the cast as well as production artwork, and brief movie clips. Unfortunately the interviews range in quality as it is obvious which members of the crew have actually ever played a videogame in their lives. The true meat of the extras would be an additional playable character and a 20 floor tower that that will really test just how well you have mastered the battle system. There are also character specific missions that unlock once the game is completed, making a game that is already packed with content that much more fulfilling.

Back in 2002 this was a pretty good looking game, like Dynasty Warriors if it had an actual budget. EA were able to seamlessly blend film footage and real time cutscenes together that was pretty impressive for the time. Despite the high number of polygonal models during battle there is rarely any slowdown. The character models are pretty ugly however, less so on the GameCube than PS2 where overall image quality is cleaner. The environments are incredibly detailed; because the camera is fixed most of the time the artists were able to deliver maximum visual impact. The soundtrack is largely the same as the movie which means it is stirring and epic.

The Two Towers remains one of my favorite beat em ups after all these years and outside of two-player coop I can’t think of anything it is missing. A decently long quest and a wealth of extras will keep you occupied for hours in what is one of the better licensed titles out there.