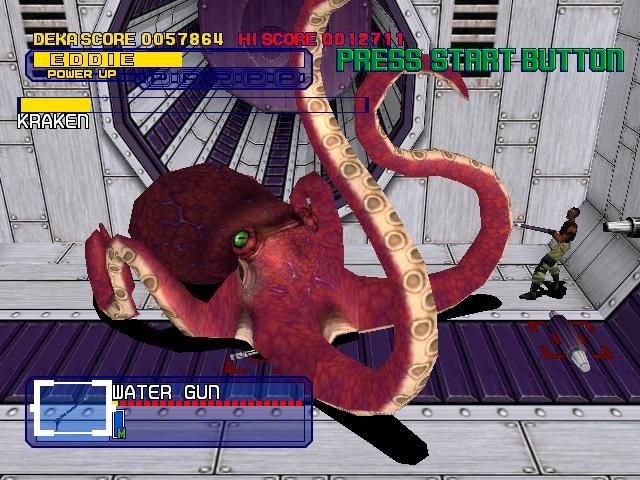 It’s no exaggeration to say that by the end of the 16-bit era the beat em up genre was a bit long in the tooth. At least on console. Even with that in mind it was a bit sad to see the genre all but disappear during the 32-bit days outside of a few really bad games. The sad thing is there many great arcade titles that were really moving the genre forward that would never see a home release. Dynamite Cop like its predecessor Die Hard Arcade nails the gameplay end but completely fumbles when it comes to creating a fulfilling experience. The game is over far too quick for me to recommend it even though I like the game.

With no license attached the game’s story is now completely bug fucking nuts. Antagonist Wolf Hongo has returned along with his group of “modern day pirates” and have stolen a cruise ship along with the President’s daughter. Except somehow she manages to escape and hides in a pink suitcase right behind the bastard with no one the wiser. It is your job as a member of a three man team to infiltrate the ship and save her.

The same great “battle” system from the first game returns and has been expanded a bit. With three characters comes a little variety although the differences between the three aren’t as pronounced as you would expect. It reeks of a missed opportunity but it also means that everyone starts on equal footing. The list of moves per character is staggering for the genre and almost overwhelming. New to this game are P-power-ups that boost your strength at max level and the ability to attack in every direction which is the only item missing from the first game and. It makes combat much more fluid; I likened these games to Virtua Fighter in a side scrolling environment and the comparison is apt.

Unlike most brawlers you don’t have the freedom to move around freely through the levels so much as the game guides you along the way. These aren’t really levels but more small arenas where you can use most objects lying around and even the environment itself as a weapon. There are no shortage of weapons to use to the point where you might rarely have to rely on your fists. It gets downright silly at times: you can beat people to death using giant fish or even a toilet plunger! Wolf Hongo’s men are just as wacky. These are some of the strangest collection of “pirates” I’ve ever seen and look more like a gang of circus freaks rather than cutthroat murderers. There’s a great deal of variety among the henchmen as well and you’ll rarely fight the same thug twice. The game moves at a brisk pace as it takes you from one set piece to the next and unfortunately that helps to highlight the game’s major flaw, its length.

As much as I love the core gameplay it still cannot hide the fact that this is an arcade game at heart, meaning it is incredibly short. A single run through the game can be completed in as little as 15-20 minutes which even by genre standards is low. Choosing a different entry point into the ship leads to an alternate route through the initial stage but that simply means you are going through the same rooms overall in a slightly different order. With infinite continues anyone will can beat the game and there aren’t enough extras like Zombie Revenge to make up for it. Sega were usually pretty good about expanding their home ports so it is apparent that this was not a priority release.

Dynamite Cop was originally created using the Model 2 arcade board which by 1999 had long been surpassed by more powerful arcade boards. As a result the game is ugly compared to other Dreamcast releases and would look more at home on the Saturn. Character models are blocky and but the animation is smooth and the few explosions look laughably bad. The game does move at a brisk 60fps but let’s be honest; considering everything else that is the least it could do. The ship’s layout and the accompanying island base are varied in their layout, you’ll just wish there were more to the game. The music is epic and stirring and wouldn’t seem out of place in a low budget film; if they had kept the Die Hard license it would have fit perfectly.

As much as I like the Dynamite Cop series they always seemed just short of greatness. Combining the extended move system with a much lengthier quest would create one of the better brawlers in the genre, which the later Spikeout embodied. This would make a worthwhile downloadable title but as a full price release in 1999 it was a hard sell.