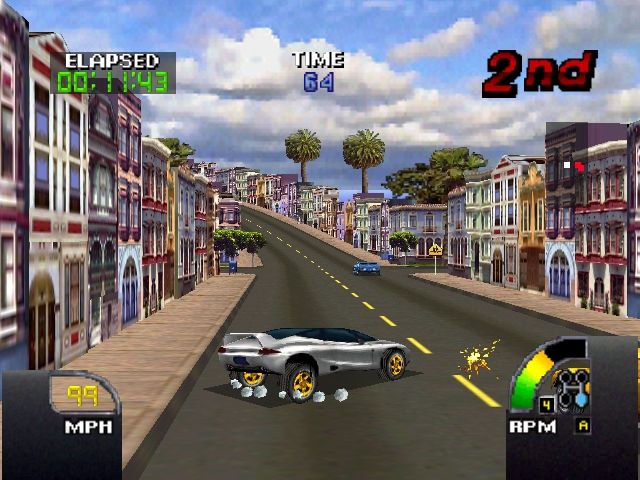 I remember when Cruis’n USA and Killer Instinct were shown off and allegedly were using Nintendo 64 technology. It was 64-bits! Fuck your 32-bits, they were leap frogging that shit! Both games seemed far ahead of their time and the prospect of arcade perfect ports of these two games on Nintendo’s future console made many salivate at what the future held. Little did we know it would be a shitty racing game. In the arcade Cruis’n USA when it’s all said and done was average; its graphics were what propped it up. 2 years is a long time when it comes to technology and much more advanced titles made it look old in comparison. When the home port eventually showed up it was ugly and a poor showing all around. Even if the port were better this would still be an average title.

The central conceit of the game is simple: this is a cross country race across the US with stops at a number of major cities such as San Francisco, Death Valley, Chicago, and Washington DC. A grand tour of the US should be exciting but it isn’t due to the incredibly boring track design. There are very few wide turns, no loops, or even split paths. Nearly all of the tracks are a mostly straight road to the finish which is incredibly boring. The only challenge come from the expert level courses, which introduce elements such as heavier traffic and narrower paths that actually make the game interesting. If this were applied to the other 70% of the game it might have been fun. Let’s not even mention multiplayer as the frame rate is just dire; god why did they even try?

I know this is an arcade racer and so realism shouldn’t be expected but the handling is completely unrealistic. There is no resistance or feedback when turning which makes it easier to navigate turns and such but presents little challenge as well. I know for some that will be a bonus but it doesn’t “feel” right. That isn’t the only issue I have with the controls. Collision is all over the place as though it wasn’t coded correctly. I have crashed into walls and other obstacles at full speed and aside from an occasional spin out or a little loss of speed was unaffected. Meanwhile I frequently ran into times where AI cars would simply bump me and it was a disaster. There’s no consistency. Speaking of speed maybe it’s because of the frame rate but I found the game lacking in that regard. At full speed

I will give Cruis’n credit, it has a lot more content than the vast majority of racing games of the time. 14 main tracks with a couple extra thrown in alongside an assortment of hidden vehicles is a lot to digest. It’s a far cry from the 3 tracks/5 cars bullshit publishers peddled for years. The good comes with the bad however as there has been some censorship applied to the game that was unnecessary. The bikini models that appear at the end of each race have been better dressed. Personally I don’t care but they weren’t gratuitous or anything so why even bother? Animals no longer stroll onto the road and present an obstacle which adds to the blandness. I remember mowing down cows and goats by the dozen in Super Offroad: the Baja and no one batted an eye. Ah well it’s not like it matters as I would still rather play Ridge Racer than this when it’s all said and done.

When Cruis’n USA was first shown off in 1994 the game was a technical marvel and enjoyed wide spread popularity. The wait for the N64 version was high but a funny thing happened. By 1996 far better racing games had come along leaving the game outdated in comparison. The blurry, low-res sprites and roadside detail looked ugly in comparison to Daytona USA on the Saturn to say nothing of Nintendo’s own Wave Race 64. The frame rate is all over the place and there is some nasty pop-up going on in the background. Honestly this was the weakest N64 game that Christmas and it was embarrassing that it sat next to Mario 64 and Pilotwings on store shelves. As if the terrible graphics weren’t enough the generic butt metal soundtrack will have you reaching for the mute button in short order.

This is simply a bad version of an outdated game. In the 2 years following the arcade game’s release Midway should have done something to improve the game but instead opted for a sloppy port. The N64 was inundated with plenty of racing games with this sitting near the bottom.