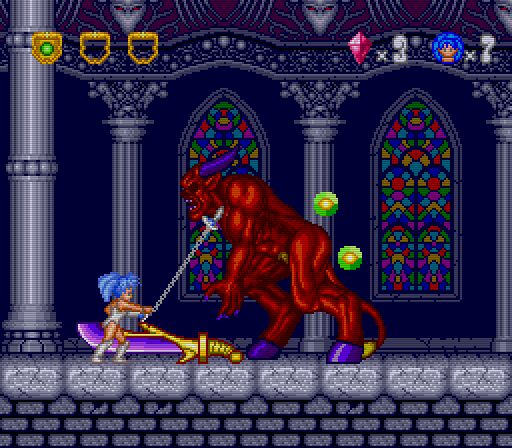 Faussete Amour is a game that I coveted for many long years. A random screenshot in a magazine is all I had to go on but it looked so awesome. As a fan of the Valis series (while at the same time acknowledging that they were OK at best) it looked set to scratch that action game itch missing on the US Turbo Grafx. But alas, it stayed in Japan like the majority of titles that would have made the CD add-on worthwhile. It would be many years before I landed a copy and after all of that anticipation the game is average at best.

Despite its surface similarity to Valis Faussete Amour has the pacing of a Castlevania game. Coruk’s baton is analogous to Simon’s whip though a bit faster. It can also be used to swing from ledges like a certain Capcom game. Taking another page from Capcom when hit Coruk loses her armor and is reduced to her bathing suit with one more hit spelling death. There are a few magic spells available although the homing thunder is so overpowered the rest can’t compete.

With all of these mechanics in place Faussete Amour would seem to be a mutant hybrid between Valis, Castlevania, and Bionic Commando. In other words the dream game I never knew I wanted. But in practice it is anything but. The controls surprisingly aren’t the greatest which makes no sense as this is a two button game. Pressing jump twice will extend your baton to latch on to a surface and swing. You have no control over the arc but can make a launching flip at any time (as a bonus you are invincible during it, abuse it!). This method is not the least bit intuitive. Even worse to activate magic you must first jump and then press down and attack which is just stupid. In spite of this setup you do get used to the controls even if they are less than ideal. One more button on the controller would have alleviated these issues but what can you do?

The level design is boring as it doesn’t present any meaningful use of your baton until the end game. The goal of each scene is to gather three crystals in order to face the boss, a feat that is never a problem. The early levels are incredibly straightforward with only a few higher platforms to explore for items. Speaking of higher ground there are far too many instances where you’ll need to make blind leaps and hope for the best. The lone instance where the swinging mechanic is used extensively is scene five which sees you climbing a tower to avoid rising lava. It comes as no surprise that this is the single best level in the game as all of the mechanics come together beautifully and will make you wish the rest of the game were put together so well.

There is an almost complete absence of any challenge despite the fact that you can only sustain two hits. Armor replacements are spaced within a few feet of each other at times which means you can be reckless and suffer little penalty. Extra lives are given out like candy; by the end of the first stage I had seven lives with barely any effort. Aside from stage five with its treacherous tower ascent and battle royal style boss battle you’ll be hard pressed to break a sweat. And I’m taking into consideration the odd boss fight and the random leaps of faith. As absurd as it sounds the lack of any difficulty is disheartening since you’ll breeze through the game so fast.

The graphics are both pretty great for the system while also disappointing at the same time. The rich color palette makes the game pop like very few from that generation and almost gives it a distinct look. The sprites are large, well designed and decently animated with the bosses being the most impressive. The backgrounds are lush with detail but are also the presentation’s weak spot. With backdrops this gorgeous though it’s a shame that they are completely static.

There are a number of cut scenes in between levels they are poorly animated, if you can even call it that. They seem to exist only to provide a ridiculous amount of fan service I guess to motivate you to press onward because let’s face it, the gameplay isn’t doing it. The camera angles frequently focus on Coruk’s ass and all of the female bosses can be seen in submissive poses once beaten. There’s a bit of nudity here and there as Coruk falls completely naked upon death and the end game boss seems to grow a pair of breasts during your final encounter. While I’m certainly not complaining it does seem out of place and completely unnecessary.

There are some good ideas buried under the lacking execution but even with that in mind Faussete Amour is not worth tracking down. Especially since the game is in the $150-200 range. Your time and money is better spent on better games like Valis IV or Rondo of Blood.