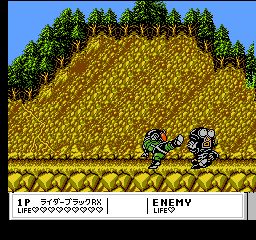 Trying to parse out which titles in the long line of super robot and sentai games that Bandai has put out are actually good is harder than you can possibly imagine. There are innumerable Gundam, Kamen Rider, and Ultraman games under strange names that I dare you to try and figure out. The Compati Hero series is a crossover between these three brands and on paper it should be awesome. However the reality is the games did not really find their stride until they hit the SNES. The Great Battle Cyber is evidence of these growing pains; for every element it gets right it also completely fumbles another. Unfortunately it has serious flaws that ruin what could have been a truly great game.

What immediately stands out are the production values. The backgrounds are expertly drawn and though they repeat a bit towards the end are still fantastic. Great Battle Cyber has a unique look, not quite SD but not full sized characters either. The sprites are larger than in most NES titles and incredibly detailed but what is more impressive is the animation. The protagonists possess a nice range of extremely well animated attacks to a degree not common on the platform. It shouldn’t come as that much of a surprise as developer Arc System Works are extremely talented as evidenced by their work with the Blaz Blue and Guilty Gear series.   This shows that that talent was always there.

The playable roster consists of Kamen Rider Black, Victory Gundam, and Ultraman Taro. The differences between each character aren’t as pronounced as you would think: Kamen Rider actually has the longest reach despite fighting with his bare hands. The Victory Gundam’s sword attacks in an arc which allows it to deflect airborne attacks and hit flying enemies from the ground. Ultraman…..you know what there’s nothing unique about him. To some extent he occupies a middle ground between the others but that leaves little reason to ever use him.

Combat is probably the game’s greatest asset. All battles in the game are one on one affairs involving a nice variety of opponents. Each character is equipped with a small arsenal of attacks and the back and forth nature of deflecting attacks and trying to find an opening is what keeps it interesting for the length of the game. Once you’ve defeated a particular enemy it becomes easy once you encounter them again however the game introduces new opponents drawn from all three respective universes right up to its conclusion. There are very few power-ups unfortunately; aside from various health items and extra lives the only weapon you’ll acquire infrequently is a gun that will allow you to breeze through fights. Abuse the hell out of it!

As much as I like combat the game’s controls are an issue. The largest problem is the delay between pressing a button and the game responding. Since some of the animation cycles are so long along with the delay you can’t make quick movements which results in cheap hits. Your movements are a slippery and imprecise which absolutely ruins the game when it comes to platforming. Where combat seems to take precedence early on halfway through the game platforming becomes the focus and it flat out barely works. By stage 7 the game ask a level of precision from you that the controls simply cannot deliver. Hopping from one hand rail to the next requires you to slap the jump button well in advance to hope that it will execute in time. Landing on a falling series of blocks and having to perform a rolling dash immediately after is just….no. I can honestly say that the second half of Great Battle Cyber is some of the most frustrating times I’ve ever spent with a game.

Because of the control issues what would have been a moderately challenging game is a Castlevania level nightmare. Once you have learned each enemy’s attack pattern running through a gauntlet of bad guys isn’t so hard even with the scarcity of health pickups. But anything to do with the jump button undermines that. Unlimited continues and passwords alleviate this somewhat but considering the game is 15 stages long you’ll feel frustration more than elation. The sad thing is there is some awesome level design toward the end of the game but I seriously doubt most will have the patience and dedication to ever reach that point.

I’m torn on this one. I like certain aspects of the game however the heavier emphasis on platforming in the second half almost completely ruins it. I wish I could say that those that stick with it will find some measure of reward but in truth it gets even more frustrating the deeper you progress. There are some good ideas in here but they are buried under shoddy execution.