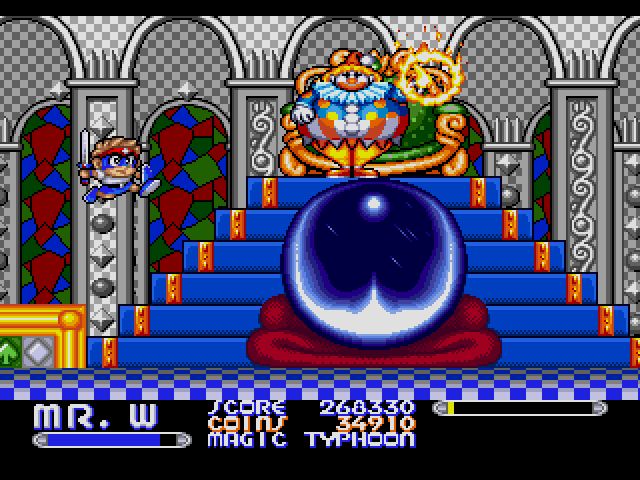 I can remember ignoring Chiki Chiki Boys for a long time during my Genesis owning days. For one I though the name was stupid. And two compared to the other releases for the system that year (Shining Force and Landstalker owned my soul) it seemed like a throwback. One desperate rental and I was pleasantly surprised. This is far from the greatest action game on the system but it is a hidden gem waiting to be discovered.

The peaceful land of Alurea is attacked by monsters and its population decimated. The only survivors are the twin sons of the King who grow up ignorant of their homeland. When they are finally told of what happened to their kingdom the brothers set out to rid Alurea of evil. Released in the arcade under the name Mega Twins this was not one of Capcom’s higher profile releases. Yet in spite of its low profile the game was ported to a wide variety of platforms. The Genesis version published by Sega (as Capcom were still not a licensee yet) is a solid edition of a forgotten arcade game and worth tracking down for a few bucks.

This is a bit of an odd release for 1993. That was the year the Genesis truly hit its stride and I think of all of the titles that practically defined the system such as Gunstar Heroes, Streets of Rage 2, and Shinobi III, games that pushed the platform both technically and design wise. As a port of a 1990 arcade game Chiki Chiki Boys certainly looks out of place next to those beasts but that doesn’t matter as this is a pretty damn good port of Capcom’s quarter cruncher.

Both brothers are selectable but the distinction between the two isn’t so pronounced. The blue twin has a stronger sword attack as evidenced by needing only six slashes to perform a strong attack versus red’s seven. The red twin can hold more magic, 5 spells versus three. It sounds cool especially as magic is extremely powerful but to take advantage of it you’ll need to spend coins buying magic. That money would be better spent on sword and shield upgrades which increase the length of your life bar and attack power. With each new upgrade the blue twin becomes the better choice; with the final sword almost every attack is a strong slash. The coins you receive can also be used to refill health between levels, buy better equipment, magic and continues.

The game covers a lot of ground, from the depths of the sea, lush forests, to the multiple levels of Riepohtman’s castle. Though the individual stages are a bit short there’s a lot of variety to the game. This isn’t strictly a platformer at all times as you’ll also take flight every so often in sequences that resembles Capcom’s own Legendary Wings. To see the true ending you’ll have to do a bit of exploring in the game’s second half. Two dragon eye stones are required to truly complete the game with the first earned by default. You’ll really have to comb every inch of the levels using only vague clues to find the second stone, providing some incentive to replay the game multiple times.

In stark contrast to the majority of arcade games of the day this was a pretty balanced game overall and that carries over to the home port. Enemies spawn in large groups but health pills always seem to drop at the right moment. The bosses are large but sport easily decipherable patterns lessening their threat somewhat. They are a bit of an endurance test as normal sword attacks only chip at their health in the beginning but by the end if you have been buying upgrades it evens out. They do go overboard a bit with the respawning enemies but that is so you can build up a decent amount of coins. That money can then be spent on upgrades that make your life easier. The game is of decent length so even though you will probably breeze through it it still feels as though you got your money’s worth.

That being said I do have to question the lack of multiplayer. Who thought this would be a good idea? It sure as hell wasn’t for technical reasons. Maybe they figured with two players the game would be too easy? While I think that is true you can definitely tell something is missing and the game does suffer for it. It’s not as though the game couldn’t have done with a bump in difficulty to make up for it. Oh well, what a missed opportunity.

Sega has done a pretty good job of bringing the bright visuals of the arcade game to the Genesis but not without some sacrifices. The arcade game sported large sprites against cute backdrops and for the most that is still intact. The color has taken a hit but is still a pretty close match. The environmental detail has taken the largest hit however. A good portion of the background decoration has either been removed or made smaller. A number of levels have been redesigned and while they sport a similar theme it’s not for the better.

I’ve only played Mega Twins in the arcade once or twice so this home port was practically a new game to me. The developers have done a great job bringing the experience home and while it is a bit simple compared to the platformers released around the same time this is still worth the few bucks it’ll cost to buy it.