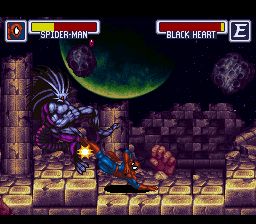 I joined the 32-bit generation a little bit late and so had to make due with my Super Nintendo and Genesis until 1997. While I certainly had nothing to complain about as the later years for both consoles produced some true classics it did start to sting as the more advanced arcade games were no longer receiving 16-bit ports. Marvel Super Heroes was one of the last big arcade games I had the chance to play for a few years as arcades in my area around the country started disappearing. When I heard about Marvel Super Heroes: War of the Gems I thought it was a retitled port and Capcom was doing Nintendo a solid one last time. I certainly did not expect…this. I’m sure they meant well but War of the Games is not a worthwhile substitute for the awesome arcade game and inferior to the game it copies in every way.

The 6 Infinity Gems have fallen to Earth with Adam Warlock recruiting Earth’s heroes to find them before a nefarious entity combines them to rule the Universe. Supposedly the game is using the same story as the arcade game but in actuality it is an adaptation of the Infinity War storyline from 1992. In it Adam Warlock’s evil aspect the Magus unleashes an army of evil doppelgangers of Earth’s heroes to exact revenge on his better half and Thanos. It was a long convoluted mess that tried to recreate the magic of the Infinity Gauntlet storyline a year prior. At the very least the premise could have made for an interesting title if the designers were at all interested in putting more than the bare minimum effort to ship the game and is instead a question of what could have been.

Make no mistake structurally this is essentially a re-skin of X-Men: Mutant Apocalypse. Your five playable characters this time are Spider-Man, Wolverine, Iron Man, the Hulk, and Captain America. For those familiar with the arcade game each character plays very similarly in terms of their move set with easy to input commands. You select from five missions from a world map except this time around you have free reign to use any given hero on a particular stage rather than a stage tailored to their strengths and weaknesses. It really frees the game as there are definite favorites for each hot spot but the fun is in mixing and matching.

The Infinity Gems become usable items once you find them and each will grant a bonus that can seriously alter a character’s playing style. The bonuses range from the mundane such as a longer life bar and detecting invisible items and walls to the damn near mandatory such as a movement speed boost and double the attack power. Some gems seem like they were tailored toward a specific hero; the Incredible Hulk is painfully slow but with the Time Gem is twice as fast and can bulldoze nearly anything. Equipping Iron Man with the Space Gem and he can essentially fly. Regardless of how much you can narrow the system down like this it is still fun to play around with different combinations.

The Gem system adds some excitement to an otherwise boring action brawler. Despite sporting a robust set of powers and techniques there is precious little to use them on. Where Mutant Apocalypse had an equal mix of action and platforming the latter is the primary focus here. That wouldn’t be a problem if it weren’t so basic. What little combat you’ll see is marred by repetitive enemies and brain dead AI. Get used to fighting Puck, Hawkeye, and the Vision as the game seems to push them out the most. The lacking enemy variety is made even worse by the fact that the story in the comic gave an excuse to have nearly the entire Marvel Universe show up in some form but Capcom cheaped out. Sucks too as the sprite work is generally well done.

The incredibly large sprites do come at the cost of interesting level design. For the most part each level is a straight line to the exit with only the occasional deviation to find a “hidden” item or such. The rare attempts at being creative such as long underwater segments are instead incredibly obnoxious due to your molasses like movement while submerged. Beyond the straightforward design is also the fact that the levels are also incredibly short. It’s pretty shocking that some locations such as the Asteroid Belt and the Amazon can be completed in seconds. That is mostly due to the fact that most levels are sparsely populated leaving your roster of attacks underserved. It gives off the impression that this was a project created as quickly and cheaply as possible as it bears none of the kinds of polish and depth you would expect from Capcom.

War of the Gems is not a bad game but I do wonder why it was created. By late 1996 16-bit was definitely on its last legs leaving the game with an incredibly low profile. What is here is decent but a definite step back from the game it is so closely patterned after. I don’t know that I would recommend seeking it out unless you are really hard up for another SNES action game.