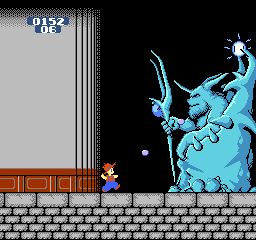 There were many licensed games for the NES, some from pretty obvious video game fodder like Batman and others that even I question why they bothered such as Home Alone. But even bearing that in mind the Adventures of Tom Sawyer stands out. This sure as hell wouldn’t have been the first novel I would have turned to in order to make a video game adaptation. And yet there is not just the one but two games based on Mark Twain’s famous novel. But, uh, the less said about that other game the better, yikes. Now having said all that the game itself is strictly average which is no surprise; who in their right mind would expect a game such as this to compete with the best in the genre.

Tom Sawyer might seem like an odd choice to base a video game but when you think about it it’s not that farfetched. In the novel Tom Sawyer had a pretty active imagination which is used as the basis for the game’s many levels. This is actually all just a dream that the character is having as he sleeps in class which basically means anything is possible. I’ll admit I came into this with low expectations and my lack of enthusiasm was warranted. Don’t get me wrong, this is far from an exceptional game and is merely average. It is simply the fact that games based on unconventional licenses such as this usually turn out completely dreadful.

Your only weapon on this dubious adventure are an infinite supply of rocks. The only problem is Tom throws like a girl. Literally. Your rocks move in a large arc and I can’t tell you just how stupid this is considering the vast majority of enemies you’ll face are small animals. You could lobby the same complaint against Adventure Island except your attacks are sensibly aimed. Hitting something immediately in front of you is next to impossible as a result. Occasionally you’ll find a slingshot which shoots straight but ammo is limited so savor it while it lasts.

Generally speaking the level design is not very good. The stages are full of gotcha moments that are unavoidable and were typical of early platform games but by 1989 creators knew better and moved away from type of design. The one area in which the levels are memorable would have to be the game’s variety. Since this is all a dream you’ll visit a variety of settings, from a pirate ship, a forest full of overgrown mushrooms, and even a haunted castle. There’s even a brief shooting segment as you take apart a dirigible. Unfortunately the merriment is brief as the game is only six levels long and can be blown through in fifteen minutes provided you can tolerate the cheap difficulty.

Despite its appearance the game is a little more difficult than your average platformer and not always in a good way. The stiff controls will lead to a cheap death more often than not but that is the least of the game’s problems. A single hit equals death and it seems the vast majority of enemies move significantly faster than you. The game isn’t above pulling cheap shots either as enemies or traps have a tendency to appear without any warning. All games require some memorization but at least the good ones are fair about it.

Normally I wouldn’t bother mentioning it but the visuals are pretty damn ugly and inconsistent. The game doesn’t start off on the best foot as you explore a non-descript pirate ship completely devoid of any character. The next level sees you drifting down the river on a raft and further fails to impress. However midway through you’ll visit an English castle that wouldn’t look out of place in Castlevania. It’s probably the game’s sole visual highlight outside of its large bosses, which are impressive considering the rest of the package.

As platformers go there are far worse available for the NES. But that isn’t exactly much of an endorsement for Tom Sawyer. This is a merely average on a system with tons of exceptional entries in the genre which means there is no reason to bother with this.