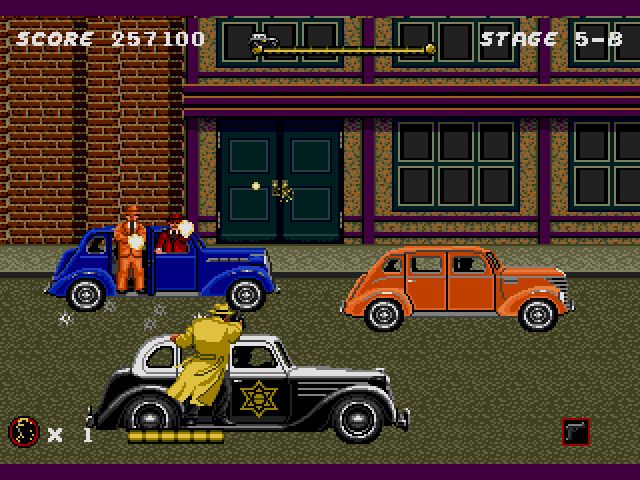 I remember the insane marketing blitz surrounding the release of the Dick Tracy movie back in 1990. I was too young to know about its origin as a newspaper strip from the 1920s and viewed it as a movie starring a colorful cast of villains like batman. With all the radio watches, fast food meals and other merchandise came video games of varying quality; the less said about the NES game the better. Its Sega counterpart fared better and outside of its steep difficulty is a pretty cool title but one that I have a hard time recommending because of it.

The 1990 film featured a star studded cast with the likes of Warren Beatty, Al Pacino, Dustin Hoffman and Madonna lending their talents. It was one of the movie events of 1990 with Disney going all out to saturate the market in Dick Tracy products. To me it seemed as though they were going for the Batman audience and considering the surface similarities between the two you can’t blame them. It didn’t exactly pan out the way they hoped but some cool stuff came out of it. The Genesis game wasn’t a direct tie-in to the film but was close enough and featured the majority of Dick Tracy’s rogue’s gallery and a few unique gameplay hooks. However its execution lets it down. This is still a good game but it can be incredibly frustrating.

In terms of mechanics I’m reminded of Shinobi/Rolling Thunder. Your pistol has unlimited ammo and doesn’t need to reload thankfully. When up close dick will belt enemies with his fists. It’s a simple setup however you have to deal with enemies on two planes, including the background. For these you’ll bust out the Tommy gun. This is probably the coolest aspect of the game and its most distinguishing feature. It’s so unique in fact the enjoyable boss battles use this mechanic specifically.

The level design bears out the similarities as well. Both are action games however you can’t blindly charge into either with guns blazing. Although the generic criminals here aren’t as, uh, “unique” as the Geldra they follow along similar lines, with specific enemies having specific forms of attack. Rarely are you ever walking in a straight line as there are boxes, crates, and support beams scattered about to hide behind for cover or just as a general nuisance. Being aware of your surroundings is crucial as enemies spawn in groups or roll in from off screen at any time. If you pay attention it is obvious where the next group will spawn although in what direction and how many is always a surprise.

Unlike Shinobi however you’ll find no power-ups to aid you whatsoever which is what makes the game brutally difficult in the end. The one concession the game makes is the bonus game at the end of every stage which is a shooting gallery where you can earn extra continues. Good luck with that however; it ramps up so fast you’d swear the designers purposely wanted to make sure you never earned your keep.

While the majority of the game consists of your typical side scrolling action it does break things up occasionally. For certain levels Dick Tracy will be unable to use his gun, forcing you to rely on your fists which is interesting in the later parts of the game to say the least. Also there are a few driving segments that see you perched on the outside of a police cruiser as you pick off rival drivers. These are interesting diversions but like the rest of the game tend to drag on too long. Some of the level themes repeat far too often

The challenge presented is pretty steep and not always for the right reasons. You’ll have a level or two at most before the game asks a little too much of you in my opinion. The rate enemies spawn is extremely high to the point where you are better off inching forward since there’s no telling where they’ll come. Without any items, even something as basic as health, the margin for error is extremely low and I’ll warn you now that most stages are long with no checkpoints.   While I can appreciate a good challenge every now and then it has to be fair and by Dick Tracy’s midpoint it crosses that line.

If that isn’t a deal breaker however the unique two plane action is engaging and rarely explored even today. With a little more polish this could have been a great game instead of a flawed gem.