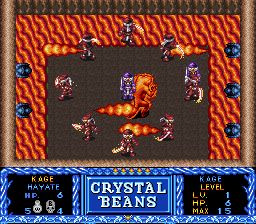 The SNES and Genesis shared many multiplatform games both stateside and abroad yet that wasn’t the case with the Turbo Grafx. The system’s shooter library shared many arcade conversions with the Genesis but none of its games saw a Super Nintendo release, at least in the US. In Japan it was the opposite with many Rpgs such as Emerald Dragon and Popful Mail (all three versions of that game are pretty awesome) hitting both formats. Dungeon Explorer II would receive a remixed port to the Super Famicom with mixed results. This isn’t a case of stuffing a CD game on a cartridge backfiring but more a series of baffling decisions that hurt the game overall.

The game’s plot differs pretty significantly. All ties and references to the original Dungeon Explorer are gone and we are left with a generic plot. The land of Grandol enjoyed a time of peace thanks to the power of the Miracle Gems, which were used to save the world once before. 100 years pass and an ominous cloud appears, spawning demon portals around the world and worse resurrecting the 15 demons sealed by the Miracle Gems. With no other choice the Heroes of Light are summoned to save the world.

The main area that the game has been improved is in its controls. With six action buttons rather than a mere two a variety of functions have been mapped to their own button. Both white and black magic are relegated to the shoulder buttons which is smart and snappy. New to the game is a melee attack that differs depending on your class. It’s useful to deal with enemies that are too close but is useless during boss battles. The better D-pad also makes aiming and movement a smoother experience. These are really simple additions but as a whole are one of the game’s few positives.

Calling Crystal Beans a port of Dungeon Explorer II isn’t entirely accurate.   This comes across more as a cliff notes version of that game rather than a simple conversion. The overall story is largely the same as well as many of the locations but there have been significant cuts during the porting process. The number of playable heroes is the same but the class upgrades have been removed as well as a number of hidden characters. Other than controls in terms of mechanics the two are identical.

One of the principal differences in this version is the removal of the overworld; you simply pick locations on a map. The absence of the overworld and any kind of exploration makes an already straightforward game that much simpler. Selecting your destination from the world map does wonders for the game’s pacing but also feels completely hollow. Although there were no weapon and armor upgrades there were many special items you could find by wandering off the beaten path but now all of that is gone. Those side quests added some much needed depth to the game as the level design is lacking. Most dungeons rarely offer anything more than one path to the boss which makes the game really feel like a heavily guided tour instead of a massive adventure.

In spite of all of the numerous subtractions I still found the game to be pretty easy. Potions drop frequently and monster generators are few in number. The only rough points are the bosses but that is due more to their cheap attacks. Many can either teleport or move so fast it’s easy to get trapped in a corner and smushed. Regardless most dungeons are only a few rooms or floors long so you’ll breeze through the game pretty quickly. I was able to finish the game in five or six hours whereas the CD version I clocked double that number easily.

The one area that you would expect to see the biggest upgrade, the graphics, are ultimately unsatisfying. The sprites have been redesigned and are larger and sport a much brighter color palette. That also extends to the many towns throughout the game. However everywhere else uses the exact same graphics as its PC Engine counterpart only slightly brighter and the juxtaposition is jarring. The Dungeon Explorer games were pretty ugly but at least were consistent in their ugliness. I feel if they went to the trouble of creating new art for towns and such they should have gone all the way. Some of the more impressive bosses have been replaced with less ambitious creatures, probably because all of these encounters are in closes rooms now. This really should turned out better.

I will say the redbook audio soundtrack has been faithfully recreated which is amazing considering the gap in hardware. Usually synth rock doesn’t fare as well on the SNES and is the Genesis’ forte but the sound programmers have done a wonderful job adapting the tunes. The extensive and well-acted intro had to be sacrificed but that was to be expected.

When it gets down to it Crystal Beans from Dungeon Explorer is not an outright bad game but one that suffers from a few crucial flaws. This easily could have and should have turned out better. While it would have been nice to see it released worldwide honestly the better version of the game was localized.