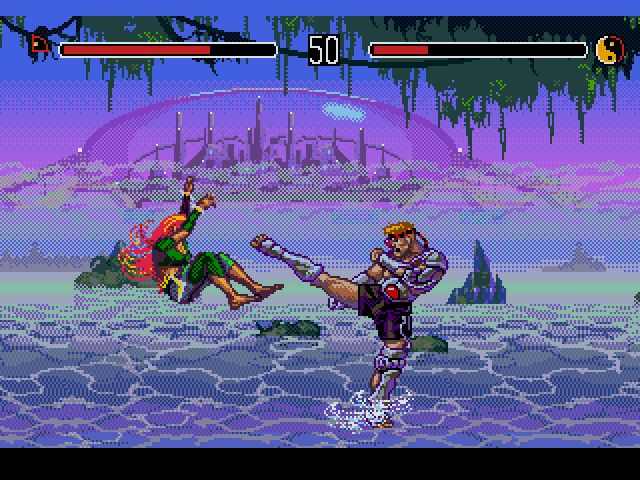 When Street Fighter 2 was successfully ported to the SNES in 1992 it was a phenomenon that is rarely seen in the industry.  This was the hottest arcade game of the time, possibly ever, now available for the newest console on the market and more or less arcade perfect to our untrained eyes.  Needless to say Genesis owners had no choice but to swallow that L and look on in envy.  Sega of America were at their most aggressive at this point and actively shored up any holes in the Genesis’ library and so Eternal Champions was born.  As a show of just how capable the platform was it was excellent but as a competitive fighting game it falls far short.

The Eternal Champion has looked into the future and seen that humanity has destroyed itself.  With his powers he discovers that the source is the death of nine individuals who in some way would have affected the course of history.  However he only has the power to revive one of them and so stages a tournament to decide who will get another chance at life.

I can see Sega’s reasoning behind the creation of Eternal Champions.  Street Fighter 2 and Mortal Kombat were tearing up the charts but at the time Capcom were still exclusively in Nintendo’s corner and no one knew if Mortal Kombat would be ported.  As one of the first console exclusive fighting games EC is a mélange of features and ideas from other games all in one package.  And while the game’s premise is sound it loses out when it comes to gameplay.

The concept of a tournament of the world’s best fighters isn’t new but the motivation behind it in this case is pretty damn cool.  The cast of characters is pulled from numerous points in time and have fully fleshed out bios detailing their history, circumstances regarding their death and fighting style.  The greatest attribute of the game is that none of its nine fighters fit comfortably into the standard Street Fighter tropes and stand on their own.  It’s daunting to have to learn something new but (could have been) rewarding to master.  Each practices a particular martial art, which sounds cool on paper but is implausible in reality.  Trident uses Capoeira but it wasn’t invented until centuries after his lifetime.

If you don’t have a six button controller don’t even bother.  The Street Fighter setup of three punches and kicks is employed and no one in their right mind wants to switch between the two using start.  Each fighter has a large arsenal of special moves that are governed by an Inner Strength meter represented by a yin/yang symbol.  Using special moves takes a small portion of inner strength that slowly replenishes with time.  Taunting can deplete your opponent’s meter, leaving them without their bag of tricks and is an important tactic for survival.

Which leads into the game’s first stumbling block.  Eschewing the standard quarter circle motions for moves the system uses a combination of Guile style charges and multiple button presses to activate moves that is frankly painful to execute.  The finger gymnastics required to pull off most special moves in the heat of combat flat out doesn’t work.  Hitting A+C or all three kicks or punches pretty much requires you to hold the controller in a weird ass way that isn’t comfortable at all.

It sucks because the array of special moves is actually pretty creative.  There are your standard fireballs and throws but these are joined by unique abilities such as Xavier’s power to swap bodies temporarily, R.A.X’s turbine which dodges projectiles and can switch positions (effective for corner traps), or even Shadow’s, uh, shadow mode.  There are moves that will buff or straight up debuff your opponents, reverse their controls or even restore health.  Training in the game’s extensive practice mode can at least help you get the hang of the timing and execution of moves but you’ll still have to deal with the ruthless computer AI.

I’m not exaggerating when I say that Eternal Champions has some of the most vicious AI I’ve ever experienced in a fighting game.  The computer is highly defensive, knows exactly how and when to counter your every move and aggressively taunts to deplete your inner strength at every opportunity.  It’s also bullshit that the computer can still execute their special moves regardless of inner strength.  Winning a single round against your first opponent let alone the entire match is a god damn cause for celebration.  The penalty for losing a single match of the tournament is pretty steep; you are sent back to face your two previous opponents; considering how hard it is to win even one match I doubt anyone would have the willpower to go through it again.

As bad as the regular opponents are it still pales in comparison to the Eternal Champion.  If by some miracle you make it that far (or cheat like I did back in the day) you are treated to one of the cheapest final boss fights in any fighting game in history, right up there with Ivan Ooze in SNES Mighty Morphin Power Rangers and King of Fighter’s ’94 Rugal.   This cheap bastard has infinite inner strength, which means he can taunt you forever and deplete your own.  He has not one, not two, but FIVE different forms that need to be beaten in a single round to win.  Your health is slightly restored in between each but you only have one shot at this; losing means you have to start over.  Considering the ending is a lame bit of text explaining what your chosen fighter did with their new lease on life I can see why they made it so hard.

It’s a god damn shame the game has no semblance of balance since it means you will more than likely never see some of its cooler features.  Fatalities exist in the form of Over kills, which are environmental kills unique to each stage.  Performing an overkill is far too stringent however; you need to be in an exact spot while performing the final hit of the final round with a non-existent margin for error.  They certainly look cool but their execution saps all the fun out of it.  Part of the reason fatalities are so fun in Mortal Kombat is the relative ease they can be performed as long as you know the button combination, a lesson EC sadly didn’t learn.

The production values in Eternal Champions were pretty stellar for the time.  As one of the first 24-megabit cartridges the extra space was put to good use.  The sprites are larger than in most 16-bit fighting games and sport an extensive range of animations.  As a console exclusive the developers made excellent use of the Genesis’s limited color palette to highlight the most minor of details in the backgrounds.  The reflective glass on the dome of Trident’s stage, the fire illuminating the houses of Xavier’s village, even the erupting volcano of Slash’s prehistoric time, this was advanced stuff.  The sound wasn’t up to the standard however as the music is forgettable and the voices, yikes.  Sampled speech on the Genesis was almost always painful to hear.

There are some good ideas buried in Eternal Champions however the game’s difficulty means you’ll never get to see or experience them.  Some fun can be found in multiplayer but at that point you might as well play a better fighting game.  The sequel is what this should have been.