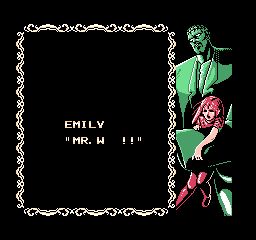 For as much as I harp on bad licensed videogames in the US it’s not as if Japan and Europe were not subjected to the same rash of cheap product.  In the UK Ocean were generally the first to jump on any movie license and usually flooded every PC format with sub-par pap.  And Japan has had to deal with Bandai for over 30 years, or as I call them the Acclaim of Nippon.  For years they put out some of the worst Dragonball and Gundam videogames but every so often one of their releases would buck the odds and nearly reach the cusp of greatness.  Frankenstein – the Monster Returns is a flawed action game along the lines of Castlevania and while it never reaches that plateau it is far better than crap such as Dragon Power and Chubby Cherub.

The villagers thought the dark times were behind them until one day Frankenstein rises from his grave and lays waste to the country.  With his army of demons no one stands a chance and just to prove how much of a dick he is he kidnaps a young girl named Emily.  As the protagonist it is your job to rescue Emily and put a stop to Frankenstein once and for all.

Like their previous bastardization Dr. Jekyll & Mr. Hyde Bandai has once again completely lost the plot.  For God’s sake the fucking monster wasn’t called Frankenstein; it’s like they based their interpretation of the story on a Hollywood movie.  Ignoring that the game is heavily inspired by Castlevania but is let down by a number of flaws that had they been fixed would have left this a solid title rather than the flawed experience it is.

You start off with nothing but your gimpy fists and a jump kick that honestly seems out of place during the period the game is set in.  Seriously you look silly trying to kick demons in the face like Bruce Lee in a medieval setting.  The short range of your punches is frustrating but it isn’t long before you’ll pick up a club from random enemies that for some strange reason is dropped when you are hit.  The club is eventually upgraded to a permanent sword with even greater range at which point the game picks up.

As a primarily melee based game the game’s hit detection leaves much to be desired.  You can never be sure of the distance needed for your attacks to connect; even projectiles seem to randomly pass through enemies unfazed.  Some of the bosses are pretty damn large and watching your sword slashed pass through them is just flat out stupid.

There are a few segments in the game with a focus on platforming and collision issues do not make them easier.  The swamp toward the end of stage 2 is incredibly frustrating in this regard and is made worse by the fact that you have to face off against a boss if you fall in; this sea monster epitomizes everything that is wrong with the game.  I almost shut the game off in anger when it was time to swing from rope to rope.

There are only four levels in the game and in some ways this almost resembles a Treasure game since you’ll face a few brief enemies before fighting a bevy of bosses per stage.  The bosses run the gamut of movie monsters from Medusa, the werewolf, vampires, and even the Grim Reaper shows up, and on the first level no less.  There are a number of original creations as well such as the demon horse and he and she monsters and when the collision issues aren’t getting in the way these encounters can be pretty fun.

Despite the game’s short length this is one of the toughest NES games to finish since you only have one life and 2 scant continues.  There are passwords for each level but the odds aren’t stacked in your favor.  There are cheap hits aplenty at every turn and the game doesn’t even have the common courtesy to refill your life bar between stages.  The final level features an insane jump in challenge as you not only have to contend with innumerable flying enemies but random potions that can kill you and about four boss battles before the fight against Frankenstein.  Two continues is simply not enough.

There’s a lot to like about Frankenstein but there’s just as much to hate.  With just a few minor tweaks it could have been a really good game to spend time with in between Castlevania and Ninja Gaiden but as it is only the most dedicated with stick with it.