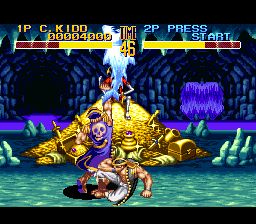 Being a Neo Geo fan in the early to mid-90s was a painful proposition for those of us that were only teenagers at the time.  You’d love the games in the arcade but to actually own a Neo Geo back then you had to be an adult with a job, rich, or pull a knife on your parents.  Which is where Takara comes into the picture.  Takara made a name for themselves during the 16-bit era by publishing ports of SNK’s most popular games to the SNES and Genesis and to fighting game fans were practically a God send.  Unlike the dire port of the original World Heroes the second game turned out much better and is a more than competent version of the arcade hit.

World Heroes 2 was part of SNK’s 100 mega shock line of games released during the summer of 1993 which also included Fatal Fury 2, Art of Fighting, and Samurai Shodown.  To those of us who were not technically inclined (ie probably 90% of the gaming audience at the time) it meant nothing but seeing the quality of the graphics and sound in those games it was obvious where all of the memory went.

Seeing as how Neo Geo games were such technical showpieces is it possible for the SNES to create a perfect port?  Hell no, you’d have to be high or stupid to think otherwise.  It does however do an excellent job of capturing the look and feel of the arcade game, all in a (at the time) $50-60 package.

With a new tournament comes new contestants and 6 new additions join the cast, bringing the total roster to 14 minus the bosses.  Just like the first game the new characters are all based on real life figures or fictional characters.  Ryoko Izumo is loosely based on Olympic Judo champion Ryoko Tani. Erick was inspired by famed explorer Erik the Red.  Those who thought SNK lost the pot with the sports themed USA team in King of Fighters 94 actually got their start with Johnny Maximum, a sadistic version of Joe Mantana.  Shura closely resembles Adon and has a slightly familiar fighting style and is based on Muay Thai fighter Nai Khanom Tom  Mudman…fuck it I think they included him because he looks cool.  My personal favorite is Captain Kidd, of the pirate with the same name.  How can you not love a pirate who attacks by throwing a ghostly pirate ship at you?

Along with the new cast comes a few refinements to the game’s fighting engine.  Projectiles can be reflected to help deal with fireball spamming.  Counter throws can be used in a pinch although I doubt most will be able to pull them off at will repeatedly.  This makes the game much more playable.  Nearly all of the returning fighters have gained new moves, some special and some alterations to their basic punches and kicks to differentiate them from each other.  For the home port you can opt to stick with arcade controls or the much better setup that makes full use of the SNES controller, giving light and heavy attacks their own button as well as throws.  Movement has been sped up; those that played the SNES version of the first game will remember that it moved at a sloven pace.  You can turn the speed up a notch higher although it didn’t seem to make much of a difference to my eyes.

Fighting against the computer can become repetitive since you’ll always face the six newbies first followed by a random four from the original cast.  This was still a few years before developers wised up and added all sorts of additional content to spruce up a game’s single player so the only extras to look forward to are playing as the bosses Neo Geegus and Dio.

What does spruce up the staid fighting is the game’s Death Match mode.  This mode is very much in the style of a wrestling match and a welcome departure from the typical 3-round shenanigans.  The normal life bar is replaced by one bar that seesaws back and forth depending on who is inflicting damage.  If the bar reaches the opponent’s end they have to slam the buttons to try and stand up before the ref finishes his ten count.  The Death Match in the title refers to the environmental hazards unique to each stage such as buzz saws, land mines, random lightning strikes, or even something as simple as a smaller fighting cage that forces confrontation.  It’s a welcome change of pace; against the computer the randomness can make a match swing either way.  Against friends they can take a while as momentum swings back and forth but that’s what makes it so fun.

When compared to the arcade game the SNES port has seen a some downgrades.  The color palette isn’t as vibrant and the sprites are noticeably smaller. The backgrounds have also had a lot of background elements removed, most likely due to the lower resolution.  It’s a more than faithful adaptation but compared to the PC Engine CD port (which does have the advantage of requiring the arcade card) it pales in comparison.

At the end of the day World Heroes is only a third tier fighting game among SNK’s stable of properties and is solid at best, lacking the standout features that would really make it stand out.  The SNES port is a very good version that manages to erase the shameful memories of the first game but doesn’t hold a candle to the likes of Super Street Fighter 2 or Mortal Kombat 2.